Current water temperature in the Sea of Azov

At the moment on the beaches in the Sea of Azov the water temperature ranges from cool to comfortable and warm.

The warmest water in the Sea of Azov was recorded today in Yeisk. The water temperature in this location is 75°F. And the coldest in Kamenskoe, its value 70°F.

Indicators of changes in water temperature values throughout the year are important. For the two most popular swimming location in the Sea of Azov, the annual schedules look like this: 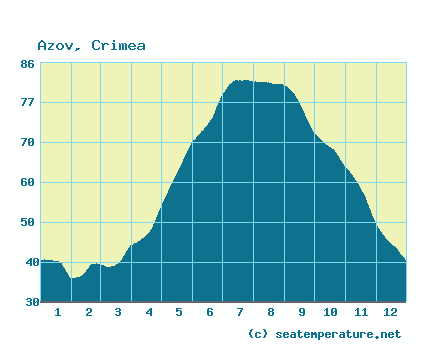 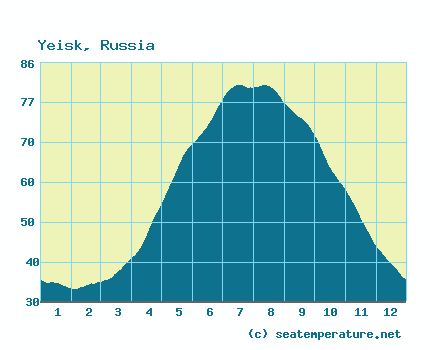 The Azov Sea is practically an inland water body connected to the Black Sea by the Kerch Strait. It is the shallowest and least salty sea in the world. Also the Sea of ​​Azov is the most continental sea of ​​the planet. The climatic features of the sea are determined by several factors. First, its location. The Sea of ​​Azov is surrounded by the steppe regions of the eastern part of Europe - the steppes of Ukraine (Zaporozhye, Kherson and Donetsk regions), Russia (Rostov region and Krasnodar Territory) and the Crimean peninsula. Since the sea is quite shallow, the temperature regime of the water in it has strong seasonal variability. The lowest water temperature occurs in January-February, and the highest in July. Water temperature values ​​range from freezing point to hot 27-29 degrees. The Sea of ​​Azov is very cold in winter, but warms up quickly with the onset of spring heat. Already at the beginning of summer, the sea temperature becomes comfortable for swimming. Summer on the Sea of ​​Azov is particularly mild. On its entire surface, approximately the same temperature is established in the region of 24-26 degrees. Such values ​​are kept until mid-September, then the processes of rapid cooling of the water begin. In winter, east and north-east winds blow from the mainland to the Sea of ​​Azov, forcing the water temperature to drop below zero degrees. The coastal areas of the sea and the Taganrog Bay are sometimes covered with a continuous layer of ice. In the Azov Sea, temperature changes with depth are very insignificant. So, in spring and summer, the water temperature drops from the surface to the bottom by about one degree. The temperature of the water in the Sea of ​​Azov is also influenced by the geographical location of a particular resort. The Crimean coast is warmer than the northern one - in the region of Berdyansk or Mariupol. Even colder water is observed near Taganrog or Yeisk. Despite the fact that the Azov Sea is less popular among tourists than the neighboring Black Sea, it has many resorts for every taste.