At the moment on the beaches in Persian Gulf the water temperature is generally cool, not for everybody. Although there are places where it is located almost in a comfortable zone.

The most popular resorts in Persian Gulf over the past week

The warmest water in Persian Gulf was recorded today in Bukha. The water temperature in this location is 72°F. And the coldest in Basra, its value 59°F.

Indicators of changes in water temperature values throughout the year are important. For the two most popular swimming location in Persian Gulf, the annual schedules look like this: 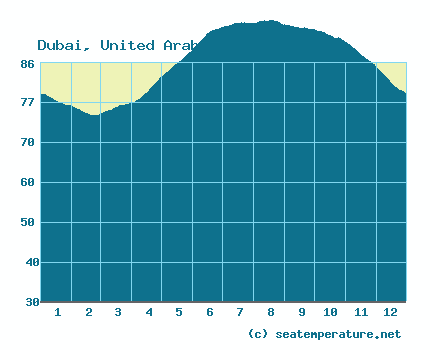 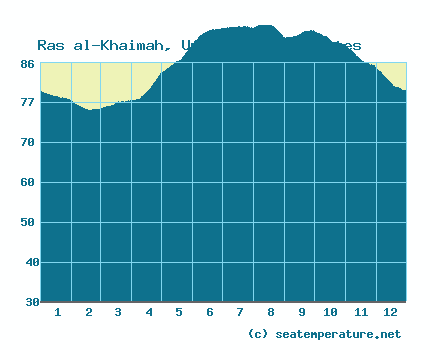 The Persian Gulf is the gulf between Iran and the Arabian Peninsula. It is connected by the Strait of Hormuz with the Gulf of Oman, the Arabian Sea and the Indian Ocean. According to the hydrological regime, it is a sea.

The waters of the Persian Gulf are washed by several countries at once, such as UAE , Kuwait, Qatar .

On the coasts of the Persian Gulf, a tropical continental climate prevails. Summers are hot, average air temperatures are + 29 - 32 degrees. In the heat, it can warm up to 40 - 50 degrees. Winters are cool in the north, where temperatures can be below zero or +2, in the south they are warm - from 22 to 25 degrees.