The most popular resorts in Mediterranean Sea over the past week

The warmest water in Mediterranean Sea was recorded today in Djounie. The water temperature in this location is 67°F. And the coldest in Serignan, its value 53°F.

Indicators of changes in water temperature values throughout the year are important. For the two most popular swimming location in Mediterranean Sea, the annual schedules look like this: 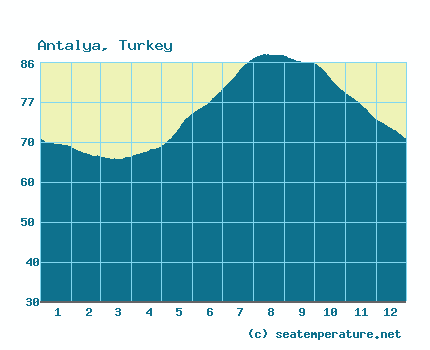 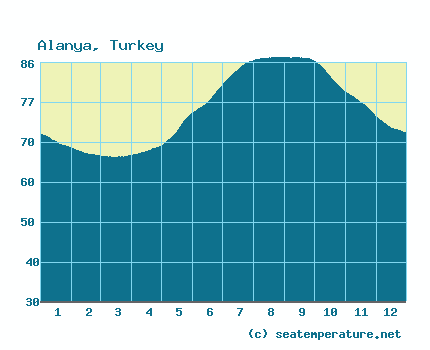 The Mediterranean Sea is an inter-continental sea, which in origin is a deep-sea pseudoabyssal intrashelf depression connected in the west with the Atlantic Ocean by the Strait of Gibraltar.

The main characteristics of the Mediterranean climate are humid and mild winters and dry, hot summers. The determining factor shaping the climatic conditions of the region in winter is the «hollow» - an area of ​​low atmospheric pressure, which is established over the Mediterranean Sea.

In the summer, the ridge of the Azores anticyclone dominates and reigns over most of the Mediterranean Sea. Thanks to this, clear weather with light cloudiness and rare precipitation is established. In the summer, SM is often visited by dry fogs and dusty haze, brought from the vast expanses of Africa by the southern wind Sirocco. At the same time, northern winds - Etesia - dominate in the Eastern region.

The water temperature in the Mediterranean Sea is generally very comfortable for swimming between June and late September. This period may vary in different countries and different resorts. The warmest water in the Mediterranean Sea is recorded in the resorts of Turkey and Cyprus. So at the height of the season in Antalya the water temperature can reach 29-30 degrees, and even 32 in Larnaca. The swimming season here lasts a very long time, until the end of November.