At the moment the water temperature on the beaches in Gulf of Mexico is very different. There are frankly cold places, there are cool enough, and there are locations with warm and comfortable water.

The warmest water in Gulf of Mexico was recorded today in Cabanas. The water temperature in this location is 80°F. And the coldest in Anahuac, its value 54°F.

Indicators of changes in water temperature values throughout the year are important. For the two most popular swimming location in Gulf of Mexico, the annual schedules look like this: 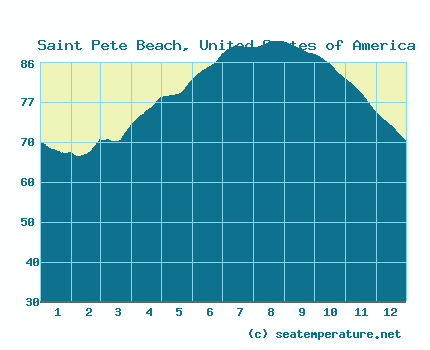 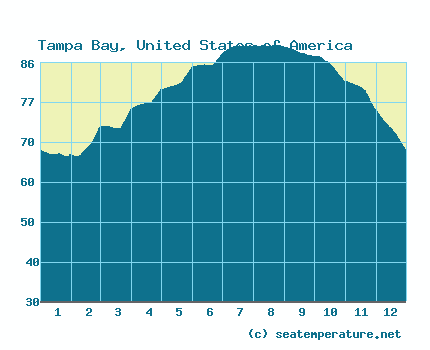 The Gulf of Mexico is the inland sea of ​​the western Atlantic Ocean. Bounded from the northwest, north and east by the US coast (states of Florida, Alabama, Mississippi, Louisiana and Texas), in the south and southwest by the coast of Mexico (states of Tamaulipas, Veracruz, Tabasco, Campeche, Yucatan), as well as the island of Cuba ...

The coastline is extremely meandering, subject to constant changes, especially after the hurricane season. The shores are mostly gentle, in places very swampy (Everglades swamps). Sand spits, shoals, banks, small and large islands (Galveston Island, Dauphin Island, etc.) stretch along the coast. At the same time, there is a gradual shallowing of the northern part of the bay due to the alluvial activity of the rivers flowing from the northern side (primarily the Mississippi River). Despite the shallowing, the area of ​​the mirror tends to increase, mainly due to the erosion of beaches and small islands (the almost extinct Chandelier Islands) near Louisiana. In the northern part of the bay, there are many smaller bays, bays and harbors (Mobile Bay, etc.), as well as lagoons and estuaries (Ponchantren, Born, Morepa in Louisiana).