At the moment on the beaches in Gulf of Bothnia the water temperature in general is in the discomfort zone, there are even very cold places. There are several locations with water temperatures approaching comfortable ones.

The warmest water in Gulf of Bothnia was recorded today in Vestlax. The water temperature in this location is 59°F. And the coldest in Kalajoen Hiekkasarkat, its value 50°F.

Indicators of changes in water temperature values throughout the year are important. For the two most popular swimming location in Gulf of Bothnia, the annual schedules look like this: 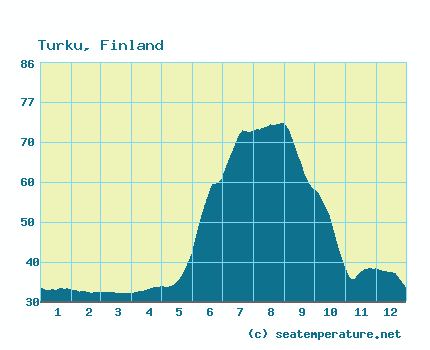 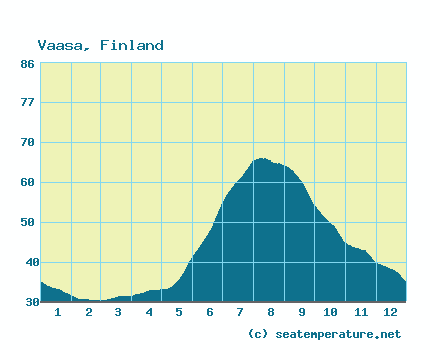 The shores of the bay are indented, along which there are many islands and skerries. The largest islands are Aland (on the border), Hailuoto, Replot and Eugmu in Finland and Gres, Hertsen and Holmen in Sweden.

There is a counterclockwise flow on the surface. At depth - the movement of water from the Baltic Sea towards the Gulf of Bothnia. The average water temperature in February is 0 ° C, in August - 9-13 ° C. The water has low salinity (1-3 ‰ in the north and 4-5 ‰ in the south) due to the large influx of fresh water (181 km³ per year). Freezing up from November to early July.