At the moment on the beaches in Coral Sea the water temperature ranges from cool to comfortable and warm.

The most popular resorts in Coral Sea over the past week

The warmest water in Coral Sea was recorded today in Sola. The water temperature in this location is 84°F. And the coldest in Port Kennedy, its value 71°F.

Indicators of changes in water temperature values throughout the year are important. For the two most popular swimming location in Coral Sea, the annual schedules look like this: 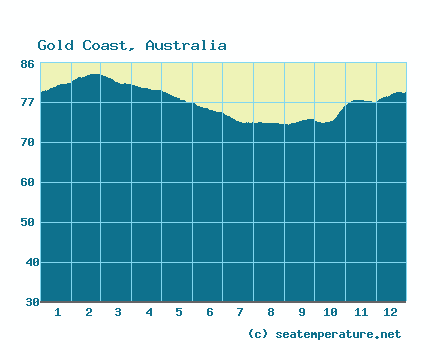 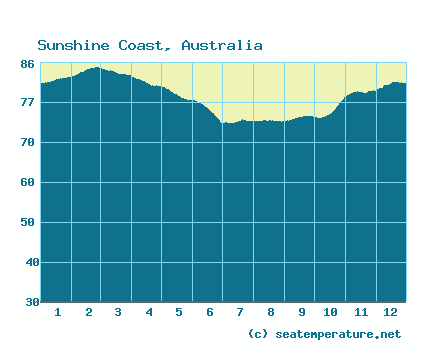 The Coral Sea is the Pacific Ocean that lies between the shores of Australia, New Guinea, and New Caledonia. The surface area is 4791 thousand km². The maximum depth is 9140 meters.

It is bordered to the west by the east coast of Queensland, including the Great Barrier Reef, to the east by Vanuatu (formerly New Hebrides) and New Caledonia, and to the northeast by the southern tip of the Solomon Islands. In the northwest, it reaches the southern coast of eastern New Guinea, including the Gulf of Papua. It merges with the Gulf of Tasman in the south, the Solomon Sea in the north, and the Pacific Ocean in the east. In the west it is bounded by the mainland coast of Queensland, and in the northwest it connects with the Arafura Sea through the Torres Strait.

The climate of the area in which the Coral Sea is located is warm, therefore the temperature of the surface layers of water, especially in its northern part, is quite stable - + 28- + 29 degrees C. In the southern regions - from +19 (August) to + 24 degrees C (February).

Surface water currents have a cyclonic (counterclockwise) direction and in the west of the sea give rise to the East Australian Current.