At the moment on the beaches in Caspian Sea the water temperature is very low and not suitable for swimming.

The most popular resorts in Caspian Sea over the past week

The warmest water in Caspian Sea was recorded today in Astara. The water temperature in this location is 48°F. And the coldest in Kaspiysk, its value 39°F.

Indicators of changes in water temperature values throughout the year are important. For the two most popular swimming location in Caspian Sea, the annual schedules look like this: 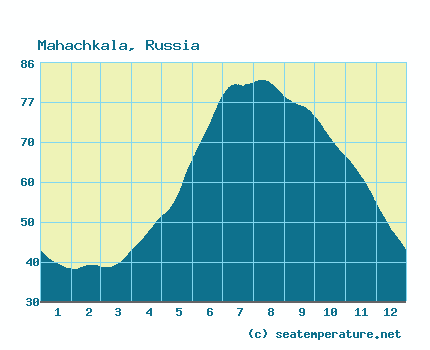 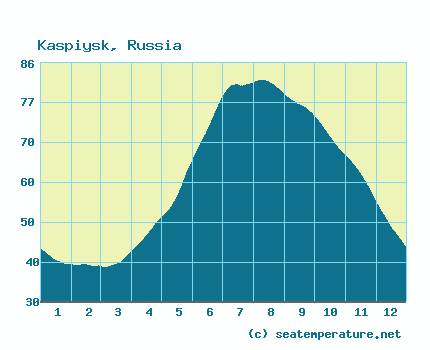 The Caspian Sea is the largest enclosed body of water on Earth. It is classified as the largest closed lake or as the sea, primarily because of its size. Its bed is composed of oceanic earth crust. The sea itself is located at the junction of Europe and Asia. The water in the Caspian is a bit brackish.

The climate of the Caspian Sea differs from the geographical latitude of the place. In the northern part of the sea it is continental, in the middle part it is moderate, and in the southern part it is subtropical.

The geographical position of the Caspian Sea determines the dependence of its climate and weather mainly on three centers of atmospheric action - the Azores, Siberian and polar, or Arctic, maximums.

Such famous cities as Baku and Makhachkala are located on the shores of the Caspian Sea.

The water temperature in the Caspian Sea is subject to significant latitudinal and seasonal variations. In winter, it changes from zero at the ice edge in the north of the sea to 10–11 degrees in the south. In summer, the sea water temperature averages 23-28 degrees, and in the shallow coastal waters in the North Caspian it can reach 35 degrees. Comfortable swimming in the Caspian Sea is possible even in October. The water in the Caspian Sea heats up in the middle of spring and you can swim in it at the end of May. The most comfortable are August and September.

The beaches of the Caspian Sea are becoming more and more popular, unlike the sea coast, there are not so many tourists and clear water.