At the moment on the beaches in Barents Sea the water temperature is very low and not suitable for swimming.

The most popular resorts in Barents Sea over the past week

The warmest water in Barents Sea was recorded today in Murmansk. The water temperature in this location is 8.0°C. And the coldest in Barentsburg, its value 0.5°C.

Indicators of changes in water temperature values throughout the year are important. For the two most popular swimming location in Barents Sea, the annual schedules look like this: 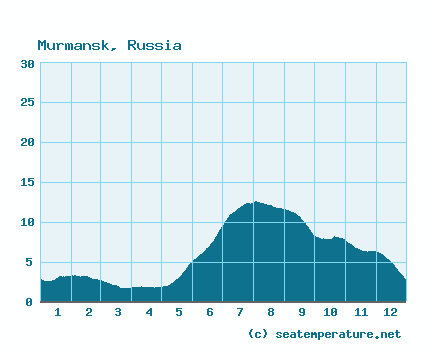 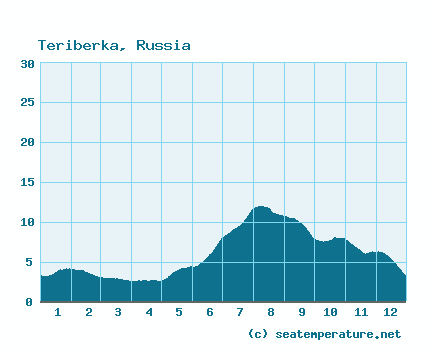 The Barents Sea is the marginal sea of ​​the Arctic Ocean. It washes the shores of Russia and Norway. The sea is limited to the northern coast of Europe and the Svalbard archipelago, Franz Josef Land and Novaya Zemlya.

The sea is located on the continental shelf. The southwestern part of the sea does not freeze in winter due to the influence of the North Atlantic Current. The southeastern part of the sea is called the Pechora Sea. The Barents Sea is of great importance for transport and for fishing - there are large ports - Murmansk and Varde (Norway).

Climate The climate of the Barents Sea is influenced by the warm Atlantic Ocean and the cold Arctic Ocean. Cloudy weather prevails over the sea throughout the year. Annual precipitation ranges from 250 mm in the north to 500 mm in the southwest.