At the moment on the beaches in Baltic Sea the water temperature ranges from cool to comfortable and warm.

The most popular resorts in Baltic Sea over the past week

Riga, Latvia | © From a Google User

The warmest water in Baltic Sea was recorded today in Nida. The water temperature in this location is 74°F. And the coldest in Mariehamn, its value 62°F.

Indicators of changes in water temperature values throughout the year are important. For the two most popular swimming location in Baltic Sea, the annual schedules look like this: 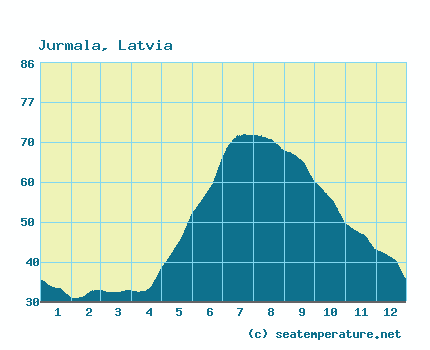 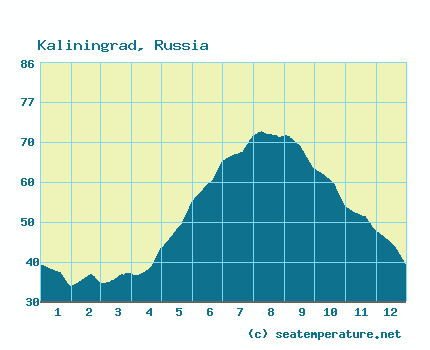 The Baltic Sea is an inland sea located in northern Europe. The sea washes ten countries at once, including Russia, Latvia and Lithuania. Such resorts as Kaliningrad, Palanga, Jurmala and Gdansk are located on the shores of the Baltic Sea.

The Baltic Sea climate has a pronounced continental character. The peculiar configuration of the sea and its considerable length from north to south and from west to east create differences in climatic conditions in different regions of the sea.

The Icelandic minimum, as well as the Siberian and Azores anticyclones, have the most significant influence on the weather. The nature of their interaction determines the seasonal features of the weather. In autumn and especially winter time, the Icelandic minimum and the Siberian maximum interact intensively, which enhances cyclonic activity over the sea. In this regard, in the autumn-winter time, deep cyclones often pass, which bring with them cloudy weather with strong southwestern and westerly winds.

In summer, weak to moderate winds blow mostly westerly, northwestern and southwestern. They are associated with the cool and humid summer weather characteristic of the sea.

The water temperature in the Baltic Sea warms up above 20 degrees only at the end of June. But its maximum values ​​still rarely exceed 22 degrees throughout the summer. The sea cools down slowly, in September you can still swim a little, the temperature at the end of the month drops to 17 degrees.