At the moment on the beaches in Atlantic Ocean the water temperature is very different. There are very cold locations, there are cool places, and there are locations with warm and comfortable water.

The most popular resorts in Atlantic Ocean over the past week

The warmest water in Atlantic Ocean was recorded today in Itacare. The water temperature in this location is 83°F. And the coldest in Bathurst, its value 29°F.

Indicators of changes in water temperature values throughout the year are important. For the two most popular swimming location in Atlantic Ocean, the annual schedules look like this: 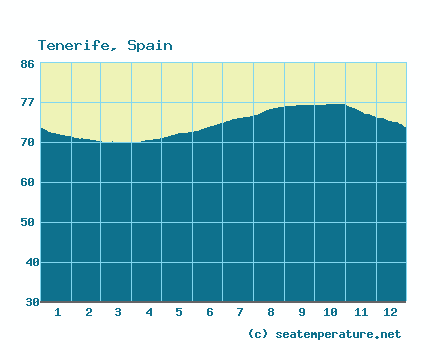 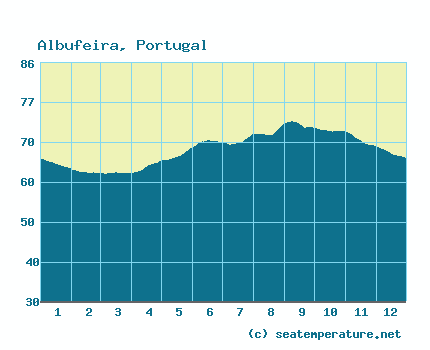 The Atlantic Ocean is located in all climatic zones of the Earth. The main part of the ocean is between 40 ° N latitude. and 42 ° S. - is located in subtropical, tropical, subequatorial and equatorial climatic zones. There are high positive air temperatures all year round. The sub-Antarctic and Antarctic latitudes have the most severe climate, and to a lesser extent, the sub-polar, northern latitudes.

The climate of the Atlantic Ocean is determined by its huge meridional length, the nature of atmospheric circulation and the ability of the water surface to significantly equalize the annual temperature variation. The oceanic climate is generally characterized by small fluctuations in air temperature. In the Atlantic Ocean at the equator, they are less than 1 ° С, in subtropical latitudes 5 ° С, and at 60 ° N. sh. and y. sh. - 10 ° C. Only in the northwest and extreme south of the ocean, where the influence of the adjacent continents is most strongly affected, the annual fluctuations exceed 25 ° C.

The warmest month in the Northern Hemisphere is August, in the Southern Hemisphere - February, the coldest - February and August, respectively. In the coldest month, the air temperature drops to + 25 ° С at the equator, + 20 ° С by 20 ° С. sh. and y. sh., 0 ° С at 60 ° n. sh. and up to - 10 ° C at 60 ° S. sh., in the extreme northwest and south of the ocean, the average air temperature over the ocean drops below -25 ° C. At the same time, there is a very noticeable difference in temperature conditions between the eastern and western parts of the ocean, caused by the distribution of warm and cold waters and the peculiarities of atmospheric circulation. Between 30 ° N sh. and 30 ° S. sh. the eastern part of the ocean is colder than the western one.