At the moment on the beaches in Arabian Sea the water temperature ranges from cool to comfortable and warm.

The most popular resorts in Arabian Sea over the past week

The warmest water in Arabian Sea was recorded today in Mangalore. The water temperature in this location is 82°F. And the coldest in Kandla, its value 67°F.

Indicators of changes in water temperature values throughout the year are important. For the two most popular swimming location in Arabian Sea, the annual schedules look like this: 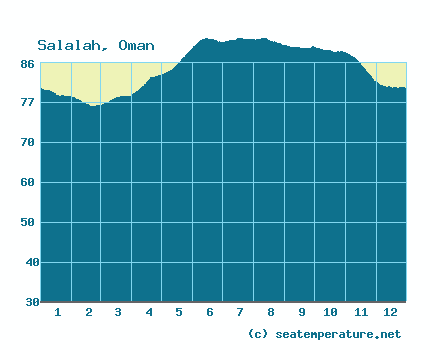 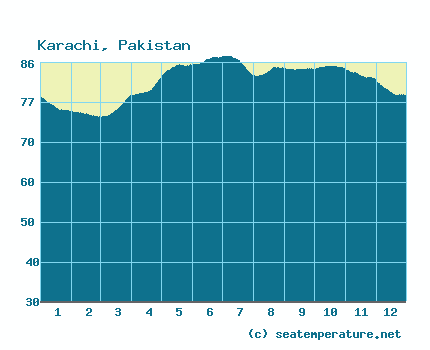 The Arabian Sea is a marginal sea in the northern Indian Ocean. Bounded by the Arabian Peninsula to the west and the Indian subcontinent to the east.

The climate of the Indian subcontinent has a significant impact on the climate of the Arabian Sea. The northeastern monsoon season, bringing clear weather to the sea, lasts from November to April, followed by the wet and cloudy period of the summer southwest monsoons. Under their influence, sea currents arise, directed east in summer and west in winter.

Warm currents have a beneficial effect on the fauna of the Arabian Sea. On the coast of Oman, two types of algae grow, which serve as food for various types of crustaceans and molluscs. Pelicans and turtles live here.

In some places, the Arabian Sea reaches a depth of more than 5000 meters. Neighboring waters, such as the Red Sea and the Persian Gulf, are much smaller and poorer. Most fish are found in the Gulf of Oman and off the western shores of India, near which many whale species migrate.