At the moment on the beaches in Adriatic Sea the water temperature ranges from cool to comfortable and warm.

The most popular resorts in Adriatic Sea over the past week

The warmest water in Adriatic Sea was recorded today in Grado. The water temperature in this location is 25.6°C. And the coldest in Ksamil, its value 21.3°C.

Indicators of changes in water temperature values throughout the year are important. For the two most popular swimming location in Adriatic Sea, the annual schedules look like this: 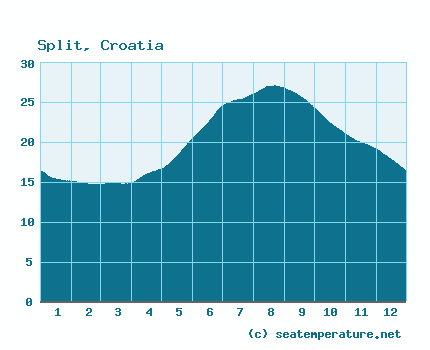 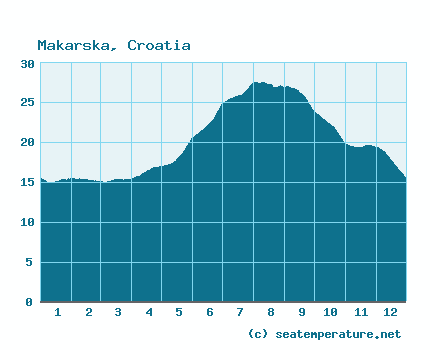 Six countries have access to the Adriatic Sea. The largest coastline is in Croatia and Italy, in Albania and Montenegro - medium, and only small coastal areas in Slovenia, as well as Bosnia and Herzegovina.

The climate of the Adriatic is Mediterranean. Warm mild winters with little rainfall and dry summers. But the Adriatic Sea has its own special features that distinguish it from the rest of the Mediterranean climate.

Local winds (bora, mistral, sirocco) are characteristic, affecting the air temperature. The water temperature from north to south varies from 24 to 26 degrees in August and from 7 to 13 degrees in February. The salinity of the water ranges from 33 to 38 ppm. Irregular semi-daily tides (up to 1.2 m). Summer is dominated by clear weather with pronounced breezes, which is occasionally replaced by rare storms, and winters are cloudy and rainy (up to 70% of the annual precipitation).

In autumn, the sea cools down to + 11 + 13 degrees. In winter, the water temperature in the Adriatic Sea never drops below 6-8 degrees. There are frequent storms in winter. Most of the annual precipitation falls.

In summer, the water always warms up above 20 degrees, reaching a maximum of 26-27 degrees. Summers are usually dry, but the heat is not felt at all thanks to the sea breezes.

From spring to autumn, but more often in July-August, mistrals dominate over the Adriatic - winds that are particularly stable, for which yachtsmen love them for their good forecasting ability. Mistral begins to gain strength, usually at 9-10 am from the southeast, changing its direction to the west. Locals describe it as «the wind following the sun.» On the high seas, it gains strength to a maximum of 20 knots, but at headlands and canals it develops high speed.