All data are in degrees Celsius. Switch to Fahrenheit
Spain > Catalonia

Today water temperature in Medes Islands is 59.9°F. Water of this temperature is considered cold enough. Dipping or immersion in such water is possible only for a short time. Staying in such water for more than two hours can lead to loss of consciousness. In any case, the general weather is also important. So, the air temperature at the same time will reach 56°F.

According to our forecast, the water temperature in Medes Islands will move in different directions, in the coming days the water will become warmer, but after 10 days it will still get a little colder to 59°F.

To develop a forecast, we use our own mathematical model, which takes into account the current change in water temperature, historical data and the main weather trends, wind strength and direction, air temperature in each specific region. We also take into account data for other resorts in Spain. 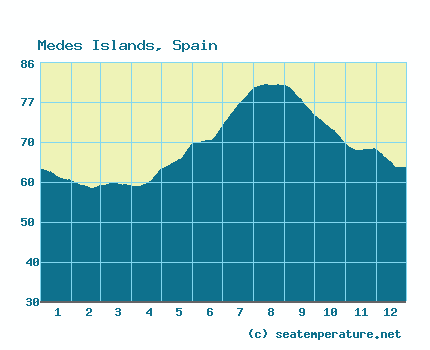 You can find out detailed data on how the water temperature in Medes Islands changes in each specific month:

The nearest airport is located in a 41 kilometers. This is Girona (GRO) airport. We have no information as to whether it is valid and what flights it receives or sends.

The weather forecast is shown in local time in Medes Islands