All data are in degrees Celsius. Switch to Fahrenheit
Ireland > Ulster

Today water temperature in Moville is 57.6°F. Water of this temperature is considered cold enough. Dipping or immersion in such water is possible only for a short time. Staying in such water for more than two hours can lead to loss of consciousness. In any case, the general weather is also important. So, the air temperature at the same time will reach 54°F.

According to our forecast, in the coming days, the water temperature value in Moville will slightly drop and in 10 days it will be 57°F. 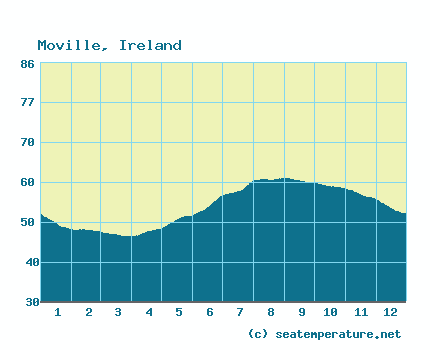 Water temperature in Moville by month

Moville located in the northern hemisphere, at latitude 55 degrees. The water in this location never warms up to comfortable values. Average annual water temperature on the coast in Moville is 51°F, by the seasons: in winter 48°F, in spring 47°F, in summer 56°F, in autumn 55°F. Minimum water temperature (44°F) in Moville it happens in March, maximum (59°F) in August.

You can find out detailed data on how the water temperature in Moville changes in each specific month:

The nearest airport is located in a 13 kilometers. This is Ballykelly (BOL) airport. We have no information as to whether it is valid and what flights it receives or sends.

The weather forecast is shown in local time in Moville