Water temperature on the beaches of Yemen

Most popular locations in Yemen over the past week

Conditions of sea water on beaches in Yemen

Now in all beaches in Yemen, the water is very warm and comfortable for swimming.

The water temperature in Yemen tends to decrease, its value has decreased both over the last 10 days and over the month.

Today the warmest water in Yemen is recorded in As Salif. Its value in this location is 82°F. And the coldest one is in Dhubab, its value 78°F.

For the two most popular locations for swimming in Yemen, the graphs of changes in the average water temperature throughout the year are as follows: 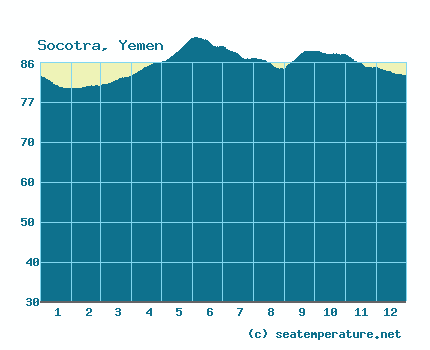 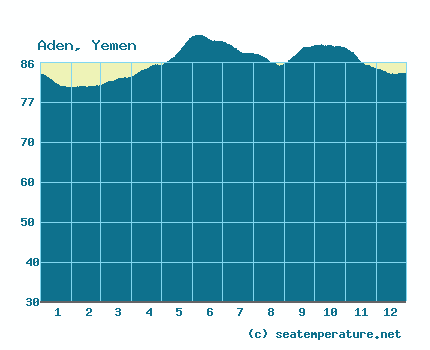 We process, analyze and store data for every beach and city in Yemen. Below is a table with current weather data and trends in some places of the country.

Yemen is located in the Middle East. The country is washed by three seas, such as the Gulf of Aden, the Arabian Sea, the Red Sea. Yemen - has a fairly long coastline. To determine the temperature of the water in it, we track 11 settlements and resorts.

Tropical monsoon, moderately hot and dry. The climatic conditions of different regions of Yemen are highly dependent on the height of the place above sea level. In the coastal areas of Tikhama, hot weather occurs all year round - up to + 40 ° С in summer (the absolute maximum temperature is about + 45-55 ° С) and up to + 32 ° С in winter with relative air humidity up to 98%. In the highlands, the climate is dry continental, with sharp changes in day and night temperatures (during the day - up to + 35 ° С in the shade, at night up to -10 ° С, and in winter the temperature on the soil at night often drops to -18 ° С) and relative humidity up to 10-20%. In the capital, for example, the average daily temperature ranges from + 25°C to + 30°C depending on the time of the year, but at night it can drop to + 4°C in the summer and -8°C in the winter. Deserted northern areas related to the Rub al-Khali desert,during the day they warm up to + 32-40°C in the summer and up to + 20-25°C in the winter, at night the air is cooled to + 8-19°C depending on the season. With a fairly hot climate (in summer - up to + 32 ° С, in winter - up to + 27 ° С), the coastal low-lying areas of the southern coast (Aden, Al-Mukalla, Saykhut) fall into the zone of influence of wet monsoons from the Indian Ocean and therefore subjectively a little cooler, than the rest of the country. However, almost one hundred percent air humidity makes staying here quite difficult to tolerate. The hottest period usually falls on June - August. Precipitation falls from 40 to 1000 mm per year. At the same time, Yemen - the wettest place on the Arabian Peninsula - twice a year monsoons bring quite a significant amount of precipitation to the slopes of local mountains. Wet season (hard to call it rainy,since most of the precipitation falls in the form of drizzle or settles in the form of thick fog) lasts from March to May and from July to August. Moreover, in the western mountains, the peak of precipitation falls between July and August, while the desert regions do not receive rain at all, sometimes for several years in a row. In the summer throughout the country sand and dust storms are not uncommon.