Water temperature on the beaches of Western Sahara

Most popular locations in Western Sahara over the past week

Conditions of sea water on beaches in Western Sahara

Now in beaches in Western Sahara, the water temperature is on the line of comfort. There are locations with cool water, there are places with more or less comfortable water.

The water temperature in Western Sahara has risen over the past 10 days, but has dropped compared to 30 days ago.

For the two most popular locations for swimming in Western Sahara, the graphs of changes in the average water temperature throughout the year are as follows: 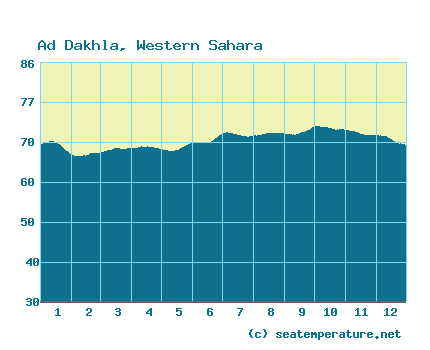 We process, analyze and store data for every beach and city in Western Sahara. Below is a table with current weather data and trends in some places of the country.

Western Sahara is located in Africa. The country is washed by the Atlantic Ocean. Western Sahara is a small country. To determine the temperature of the water in it, we monitor only one locality.

Tropical, dry. High temperatures are kept all year round, sharp daily fluctuations are characteristic - from 0 C at night to +65 C (on the soil) in the afternoon. Precipitation is not more than 50-200 mm. in year.Cold oceanic air masses often bring fog and cold dew. Tornadoes and sandstorms are frequent.