Water temperature on the beaches of Vietnam

Most popular locations in Vietnam over the past week

Conditions of sea water on beaches in Vietnam

Now in all beaches in Vietnam, the water temperature is quite comfortable, and in some places it is very warm and even hot.

The water temperature in Vietnam tends to decrease, its value has decreased both over the last 10 days and over the month.

Today the warmest water in Vietnam is recorded in Phu Quoc. Its value in this location is 84°F. And the coldest one is in Ha Long, its value 75°F.

For the two most popular locations for swimming in Vietnam, the graphs of changes in the average water temperature throughout the year are as follows: 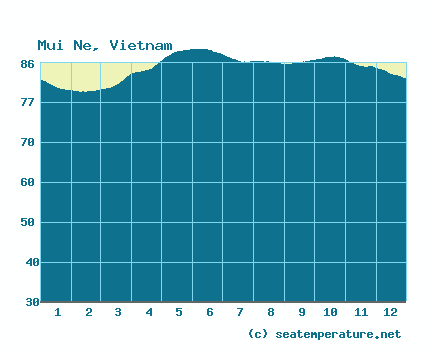 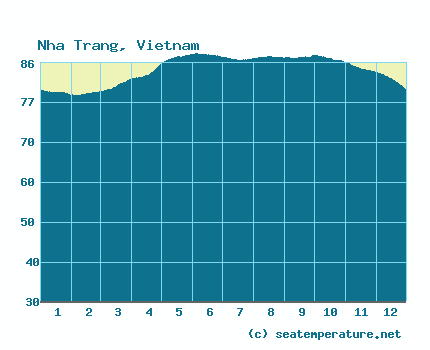 We process, analyze and store data for every beach and city in Vietnam. Below is a table with current weather data and trends in some places of the country.

Vietnam is located in Asia. The country is washed by two seas, such as the Gulf of Thailand, the South China Sea. Vietnam - has a fairly long coastline. To determine the temperature of the water in it, we track 21 settlements and resorts.

In most of the country, the climate is tropical monsoon, in the north it is close to subtropical, in the south it is subequatorial. Weather conditions are formed under the influence of summer wet (south and southwest) and winter dry (northeast) monsoons. The average temperature during the year varies little and ranges from +26 C in December to +29 C in April. In the north, the hot season lasts from May to October (+ 27-33 C), relatively cool weather (+ 15-23 C) is here from November to April. In the south, in the subequatorial climate zone, the temperature is relatively stable all year round (about + 29-35 C), only in the winter season the thermometer drops to + 22-27 o C. The average humidity at any time of the year is about 80%. In mountainous regions, where the climate is close to temperate, in the summer about + 17-25o C, in winter the temperature can drop to + 7-12 C at very high humidity. Precipitation is about 2000 mm per year, and in some parts of the Central Plateau up to 3300 mm. In all areas of the country there are two pronounced seasons - dry and rainy. In the north, the rainy season lasts from May to October, in the south - from June to August, in the central regions of the country - from August to January (from November to December the maximum amount of rainfall). The relatively cold and humid winters in the northern and central coastal lowlands are often accompanied by fogs and drizzling rain. In spring and autumn, the weather is also quite unstable, and from mid-October to late December typhoons collapse on the coast.