Water temperature on the beaches of Venezuela

Most popular locations in Venezuela over the past week

Conditions of sea water on beaches in Venezuela

Now in all beaches in Venezuela, the water is very warm and comfortable for swimming.

The water temperature in Venezuela tends to decrease, its value has decreased both over the last 10 days and over the month.

Today the warmest water in Venezuela is recorded in Cabimas. Its value in this location is 84°F. And the coldest one is in Lecherias, its value 79°F.

For the two most popular locations for swimming in Venezuela, the graphs of changes in the average water temperature throughout the year are as follows: 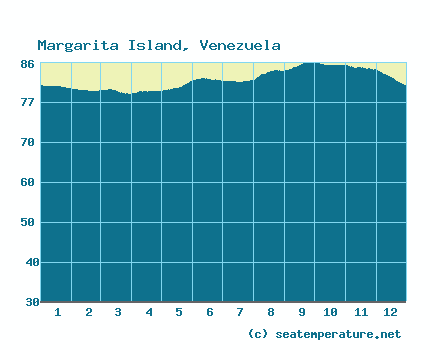 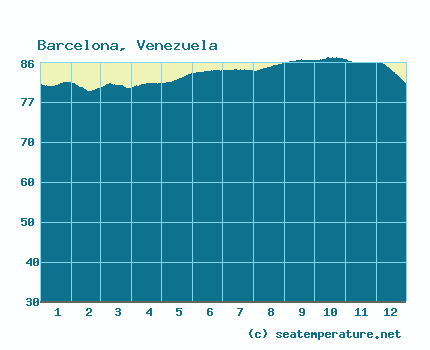 We process, analyze and store data for every beach and city in Venezuela. Below is a table with current weather data and trends in some places of the country.

Venezuela is located in South America. The country is washed by the Caribbean Sea. Venezuela - has a fairly long coastline. To determine the temperature of the water in it, we track 32 settlements and resorts.

In most of the country, the subequatorial climate dominates, only the north-west of Venezuela is influenced by altitudinal zonation, which significantly complicates the nature of the distribution of natural conditions. The country is located just north of the equator, and therefore the temperature varies relatively weakly during the year - at an average annual temperature of + 21-26 o C, in Caracas it ranges from +18 to +20 o C, and in Maracaibo from +27 to + 29 o C. In the mountainous regions, the average January air temperature ranges from + 4-9 o C, in the summer it can reach +23 oC, depending on altitude. The distribution of precipitation throughout the country is heterogeneous. In the western regions, no more than 280 mm of rain falls per year, while the mountainous regions of the Cordillera de Merida can receive up to 3000 mm of rain per year. The northern coastal lowland is relatively arid (no more than 150 mm per year), but as it moves south, the amount of precipitation increases - up to 300 mm per year in Orinokia, up to 500 mm in some areas of the Gayan Highlands, with periods when wet air masses coming from the Amazon basin and the Atlantic Ocean increase the amount of precipitation up to 600-700 mm per year. Moreover, in the Amazon region themselves, the total amount of precipitation is small - about 200 mm. Two seasons are conventionally distinguished, markedly different from each other in terms of rainfall,but not much different in temperature. The dry season (“verano» or “berano») falls on the period from December to April. The wet season (“in-season») covers all the remaining time. There is no pronounced dry season in the Amazon region; precipitation is distributed fairly evenly. The territory of the country lies away from the path of movement of tropical hurricanes and is almost not exposed to their destructive effects.