Water temperature on the beaches of Vanuatu

Most popular locations in Vanuatu over the past week

Conditions of sea water on beaches in Vanuatu

Now in all beaches in Vanuatu, the water is very warm and comfortable for swimming.

The water temperature in Vanuatu has increased both over the past 10 days and over a month.

Today the warmest water in Vanuatu is recorded in Port Vila. Its value in this location is 86°F. And the coldest one is in Isangel, its value 83°F.

For the two most popular locations for swimming in Vanuatu, the graphs of changes in the average water temperature throughout the year are as follows: 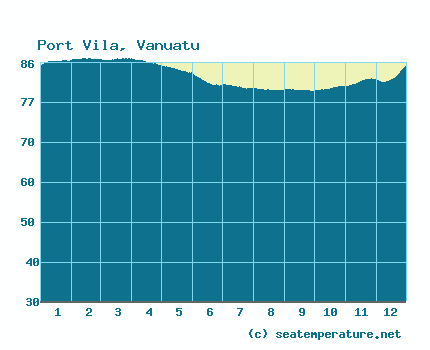 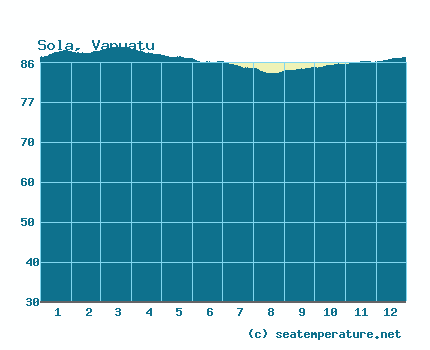 We process, analyze and store data for every beach and city in Vanuatu. Below is a table with current weather data and trends in some places of the country.

Vanuatu is located in Australia and Oceania. The country is washed by two seas, such as the Pacific Ocean, the Coral Sea. Vanuatu is a small country. To determine the temperature of the water in it, we track only six settlements.

Tropical marine. In summer (January-February), average monthly temperatures are around + 27-29 o C, in winter it is slightly cooler - in July-August the temperature drops to + 22-24 C (in the mountains, temperatures can drop to + 10 C). Strong southeast trade winds from May to October slightly reduce the heat. Water temperature is about +24 C in January and up to +28 C in July. The average annual rainfall is from 1000 mm per year in the southern group, to 3000 mm (in some years, up to 4000 mm) in the north. Depending on the amount of precipitation, two seasons are observed - during the dry season (May - October), no more than a quarter of the annual norm falls, while in the wet season (November - April), heavy rains occur almost daily. From December to March-April, powerful tropical hurricanes pass through the territory of Vanuatu. It is believed that Vanuatu is the most prone country in the South Pacific. Between 1970 and 1985 at least 29 devastating hurricanes passed through Vanuatu, causing significant damage to the economy of the islands.