Water temperature on the beaches of Ukraine

Most popular locations in Ukraine over the past week

Conditions of sea water on beaches in Ukraine

Now in the beaches in Ukraine, the water temperature is very low and not suitable for swimming.

The water temperature in Ukraine tends to decrease, its value has decreased both over the last 10 days and over the month.

Today the warmest water in Ukraine is recorded in Katranka. Its value in this location is 51°F. And the coldest one is in Ishmael, its value 32°F.

For the two most popular locations for swimming in Ukraine, the graphs of changes in the average water temperature throughout the year are as follows: 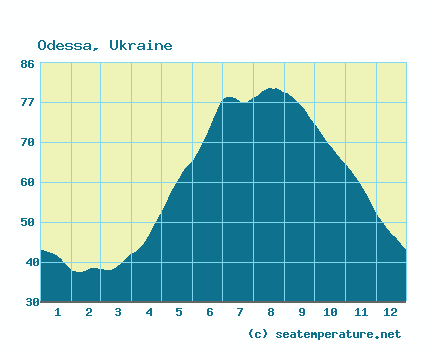 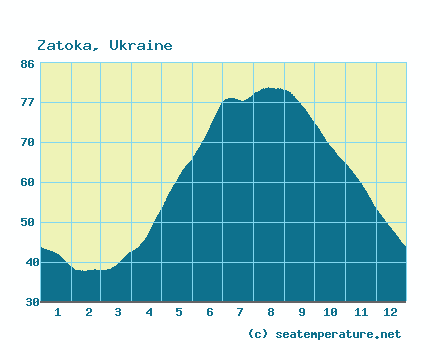 We process, analyze and store data for every beach and city in Ukraine. Below is a table with current weather data and trends in some places of the country.

Ukraine is located in Europe. The country is washed by two seas, such as the Black Sea and the Sea of ​​Azov. We also show water temperature in 21 rivers and seven lakes in Ukraine. Ukraine is a large resort country and has a long coastline. To determine the temperature of the water in it, we track 145 settlements and resorts.

The climate in Ukraine is temperate, mainly continental, on the southern coast of Crimea - subtropical Mediterranean. Average January temperatures range from -8°C in the northeast to + 4-8°C in the south of Crimea, July - from + 18°C to + 24°C, respectively. Precipitation in the north-west falls to 600-700 mm per year, in the southeast - up to 300 mm, in the Crimean mountains - 1000-1200 mm, in the Carpathians - up to 1600 mm, mainly in the autumn-winter period.

We are ready to provide information on the water temperature in such rivers in Ukraine: