Water temperature on the beaches of Tuvalu

Most popular locations in Tuvalu over the past week

Conditions of sea water on beaches in Tuvalu

Now in all beaches in Tuvalu, the water is very warm and comfortable for swimming.

The water temperature in Tuvalu tends to decrease, its value has decreased both over the last 10 days and over the month.

For the two most popular locations for swimming in Tuvalu, the graphs of changes in the average water temperature throughout the year are as follows: 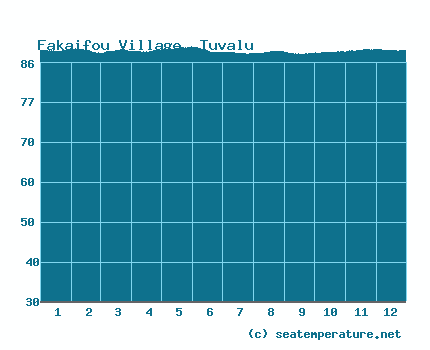 We process, analyze and store data for every beach and city in Tuvalu. Below is a table with current weather data and trends in some places of the country.

Tuvalu is located in Australia and Oceania. The country is washed by the Pacific Ocean. Tuvalu is a small country. To determine the temperature of the water in it, we monitor only one locality.

Subequatorial marine, hot and humid, with mild seasonal changes. The main source of weather fluctuations in Tuvalu is the southeastern trade winds blowing from March to November, as well as strong westerly winds (November - April). The average annual temperature fluctuates around the mark of +29 o C. Moreover, the air temperature almost never drops below +24 C and at the same time does not exceed +34 C, regardless of the time of year. The water temperature off the coast of the islands ranges from +22 C to +37 C, depending on the season and the depth of the place. The average annual rainfall is from 3,500 mm per year on the southern islands to 3,000 mm in the north. It rains almost every day, but the powerful tropical showers that are so characteristic of this part of the planet are usually accompanied by clear skies. Most precipitation falls between October and March. From November to April, powerful westerly winds dominate Tuvalu. Although this period is usually called the «hurricane season», hurricanes themselves are quite rare here - in the XX century there were only four serious «natural disasters», but all in the period after 1972.