Water temperature on the beaches of Tunisia

Most popular locations in Tunisia over the past week

Conditions of sea water on beaches in Tunisia

Now in all beaches in Tunisia, the water temperature is quite comfortable, and in some places it is very warm and even hot.

The water temperature in Tunisia has increased both over the past 10 days and over a month.

Today the warmest water in Tunisia is recorded in Gabes. Its value in this location is 81°F. And the coldest one is in Korba, its value 73°F.

For the two most popular locations for swimming in Tunisia, the graphs of changes in the average water temperature throughout the year are as follows: 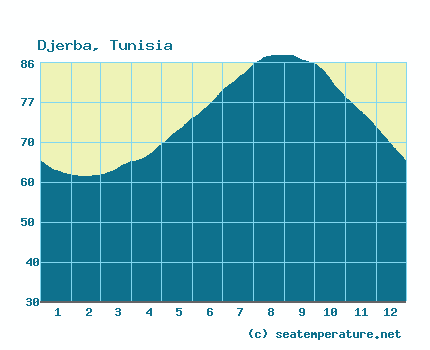 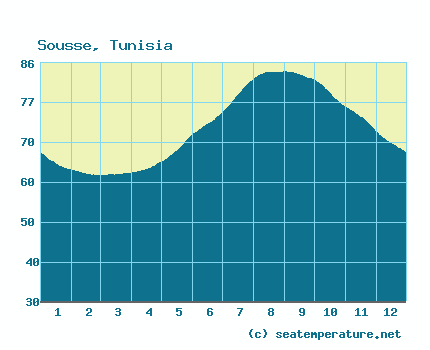 We process, analyze and store data for every beach and city in Tunisia. Below is a table with current weather data and trends in some places of the country.

Tunisia is located in Africa. The country is washed by the Mediterranean Sea. Tunisia - has a fairly long coastline. To determine the temperature of the water in it, we track 26 settlements and resorts.

The subtropical Mediterranean in the north and along the coast, in the south and in the interior is tropical desert. The average January temperatures in the north are + 10°C, in the south + 21°C, July - + 26°C and + 33°C, respectively. Summer heat on the coast is mitigated by the sea breeze, so subjectively it seems somewhat cooler than it actually is. In desert regions, frosts are frequent at night, even in spring and autumn, although during the day the temperature during this period can reach + 25-27 ° С. Precipitation (mainly in the form of rain) falls from 100 mm per year in the south and up to 1500 mm in the mountainous regions, although some desert regions have not received them at all for many years in a row.