Water temperature on the beaches of Trinidad and Tobago

Most popular locations in Trinidad and Tobago over the past week

Conditions of sea water on beaches in Trinidad and Tobago

Now in all beaches in Trinidad and Tobago, the water is very warm and comfortable for swimming.

The water temperature in Trinidad and Tobago tends to decrease, its value has decreased both over the last 10 days and over the month.

Today the warmest water in Trinidad and Tobago is recorded in Crown Point. Its value in this location is 81°F. And the coldest one is in Charlotteville, its value 80°F.

For the two most popular locations for swimming in Trinidad and Tobago, the graphs of changes in the average water temperature throughout the year are as follows: 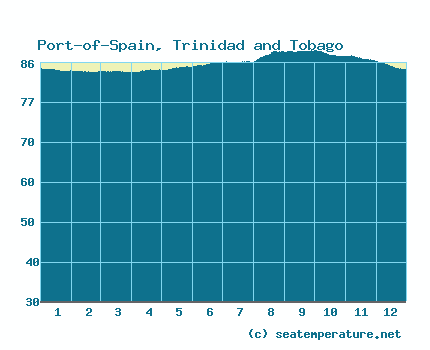 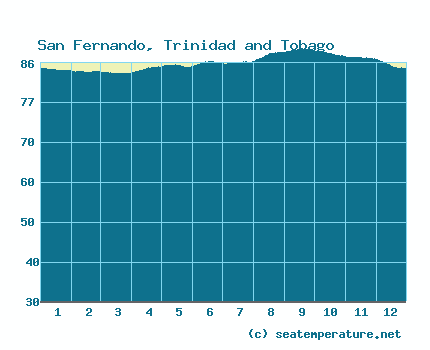 We process, analyze and store data for every beach and city in Trinidad and Tobago. Below is a table with current weather data and trends in some places of the country.

Climate in Trinidad and Tobago

Subequatorial trade winds, hot and humid. Monthly average temperatures (+ 25-27 C) vary little during the year, however, the difference between day and night is quite noticeable - from January to May, the temperature in Port of Spain reaches +31 o C during the day , while at night may fall to +22 oC. Northeast trade winds moderate the heat slightly from January to May. A characteristic feature of the local climate is a rather significant difference in the nature of the distribution of precipitation. During the rainy season (June-August, sometimes until December), powerful tropical showers regularly rain down on the islands, and it rains almost every day, and the amount of precipitation reaches, on average, 260 mm monthly (up to 3800 mm in the north-east of the island of Trinidad rain per year). From February to May there is dry and sunny weather, and the amount of precipitation is not more than 150 mm per month. Humidity is high all year round - from 84% between June and August to 66% in the dry season. The islands of Trinidad and Tobago lie outside the «hurricane belt» and are not affected by natural disasters.

Trinidad and Tobago: oceans and seas