Water temperature on the beaches of Tonga

Most popular locations in Tonga over the past week

Conditions of sea water on beaches in Tonga

Now in all beaches in Tonga, the water is very warm and comfortable for swimming.

The water temperature in Tonga has increased both over the past 10 days and over a month.

Today the warmest water in Tonga is recorded in Neiafu. Its value in this location is 84°F. And the coldest one is in Havelu, its value 79°F.

For the two most popular locations for swimming in Tonga, the graphs of changes in the average water temperature throughout the year are as follows: 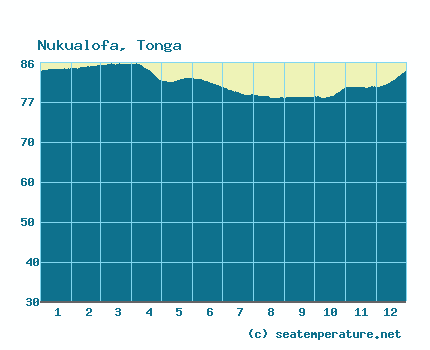 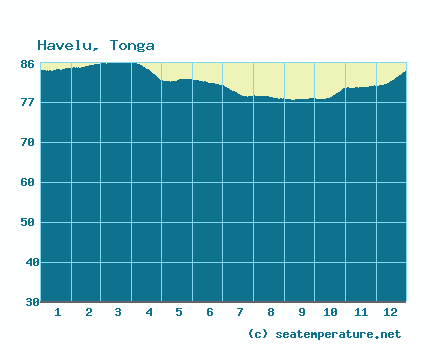 We process, analyze and store data for every beach and city in Tonga. Below is a table with current weather data and trends in some places of the country.

Tonga is located in Australia and Oceania. The country is washed by the Pacific Ocean. Tonga is a small country. To determine the temperature of the water in it, we track only five settlements.

Tropical trade wind, very warm and even. Since the country is very elongated from north to south, the climate of individual islands varies slightly. In general terms, two seasons stand out: hot (from December to April-May) and cool (from May to December). Southeastern trade winds determine cooler weather from May to November, while westerly and northwesterly winds, which bring with them a rise in temperature and precipitation from November to April-May, can also be a harbinger of powerful tropical hurricanes. In the north, annual temperature fluctuations are almost invisible (the average annual temperature is about + 26 C), the seasons differ only in the amount of precipitation: winter (June - August) is rather dry, at that time no more than 200 mm of rain falls, summer is wetter - up to 600 mm precipitation. In the south, the climate is drier, from May to October, 120-150 mm of precipitation falls per month, from December to February about 240 mm, and in the rainiest month (March) - up to 400 mm. Water temperature off the coast of the southern group varies from +21 C in June to +29 C in November, in the north these indicators differ by only 1-1.5 degrees in the direction of increasing temperature.