Water temperature on the beaches of Thailand

Most popular locations in Thailand over the past week

Conditions of sea water on beaches in Thailand

Now in all beaches in Thailand, the water is very warm and comfortable for swimming.

The water temperature in Thailand has risen over the past 10 days, but has dropped compared to 30 days ago.

Today the warmest water in Thailand is recorded in Prachuap Khiri Khan. Its value in this location is 86°F. And the coldest one is in Mai Khao Beach, its value 82°F.

For the two most popular locations for swimming in Thailand, the graphs of changes in the average water temperature throughout the year are as follows: 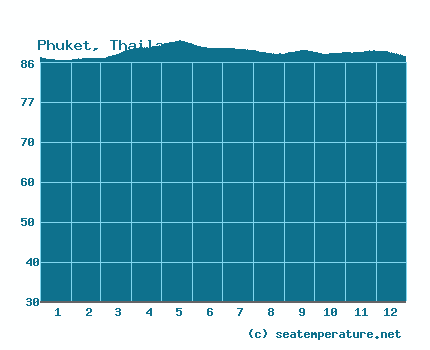 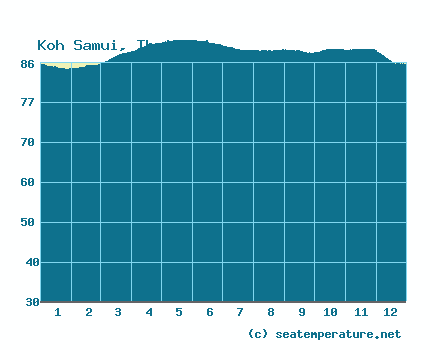 We process, analyze and store data for every beach and city in Thailand. Below is a table with current weather data and trends in some places of the country.

Thailand is located in Asia. The country is washed by three seas, such as the Andaman Sea, the Gulf of Thailand, the South China Sea. Thailand - has a fairly long coastline. To determine the temperature of the water in it, we track 60 settlements and resorts.

Due to the large extent of the country from north to south, two main types of climate are quite pronounced here - tropical in the north and tropical monsoon in the southern and southeastern regions. Common to them are high temperature and humidity. In the central part of Thailand, three seasons are distinguished: hot (from March to May), rainy (from June to October, when the southeast monsoon falls on the country and most of the annual rainfall falls) and cool (from November to February). At the same time, this division is rather arbitrary - heavy rains can occur at any time of the year, so the main criterion is air temperature. There is no single rainy season for the whole country - depending on the direction of the prevailing wind, even two neighboring regions can receive an order of magnitude different amount of rain.Moreover, the total rainfall is 1000-2000 mm per year (in the mountains up to 5000 mm), and they mainly fall in the form of strong tropical showers. In Bangkok, in April, the average air temperature ranges from + 22°C to + 29°C, in December - + 21-22°C. The maximum rain falls in September-October (250-300 mm per month), and the minimum - in December-January (no more than 20 mm). In Chiang Mai, the air temperature in summer ranges from + 28°C (April) to + 26°C (August), and the peak of the rainy season occurs in September (270 mm). At the same time, from November to March, rains are quite rare (maximum 30 mm per month), but air humidity continues to remain high (70-80%).In the area of ​​the Malacca Peninsula and numerous resort islands of the country, it is noticeably hotter - almost all year round the average air temperature is in the range + 26-29 ° С (in winter it can drop to + 22 ° С at night in April and in April the air warms up to + 34- 38°C). The maximum rain falls in May and September-October (300-350 mm per month), and in winter it is noticeably rainier (50-70 mm per month) than in the north.