Water temperature on the beaches of Switzerland

Most popular locations in Switzerland over the past week

Conditions of sea water on beaches in Switzerland

Now at all beaches in Switzerland, the water is heated to a comfortable temperature for swimming.

The water temperature in Switzerland has increased both over the past 10 days and over a month.

Today the warmest water in Switzerland is recorded in Geneve. Its value in this location is 75°F. And the coldest one is in Morges, its value 74°F.

For the two most popular locations for swimming in Switzerland, the graphs of changes in the average water temperature throughout the year are as follows: 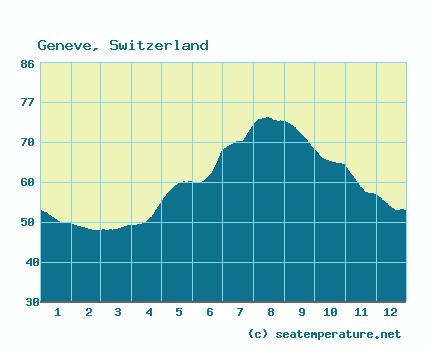 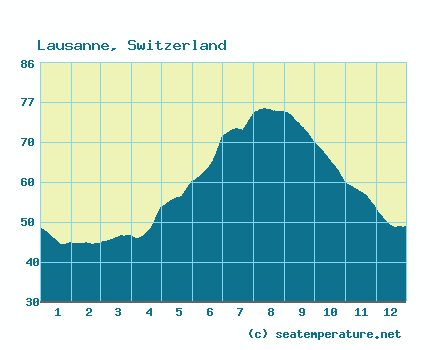 We process, analyze and store data for every beach and city in Switzerland. Below is a table with current weather data and trends in some places of the country.

Moderately continental, alpine, but rather diverse, which is rather unusual for such a small country. The climatic conditions of each particular place strongly depend on the height and topography, therefore, in general, many local zones can be found in Switzerland. The canton of Ticino in the south has an almost Mediterranean climate, the central regions are closer to temperate, and in Mitteland the influence of marine air masses is noticeable. Moreover, all mountainous regions are close in their conditions to a moderate continental type of climate - winters are long and rather cold, summers are warm, and most of the precipitation falls in winter in the form of snow. The natural contrasts in the country are sometimes simply amazing. In Geneva, the average January temperature is around + 6°C, in July - + 19°C,while lying just 70 km east of Martigny it has 0 ° С and + 16 ° С, respectively. At the same time, the central and northern regions of the country with their small heights rarely cool below + 9 ° С in winter, and warm up to + 22-31 ° С in summer - in many mountain lakes it has even become possible to swim in recent years.