Water temperature on the beaches of Suriname

Most popular locations in Suriname over the past week

Conditions of sea water on beaches in Suriname

Now in all beaches in Suriname, the water is very warm and comfortable for swimming.

The water temperature in Suriname tends to decrease, its value has decreased both over the last 10 days and over the month.

Today the warmest water in Suriname is recorded in Nieuw Nickerie. Its value in this location is 82°F. And the coldest one is in Paramaribo, its value 80°F.

For the two most popular locations for swimming in Suriname, the graphs of changes in the average water temperature throughout the year are as follows: 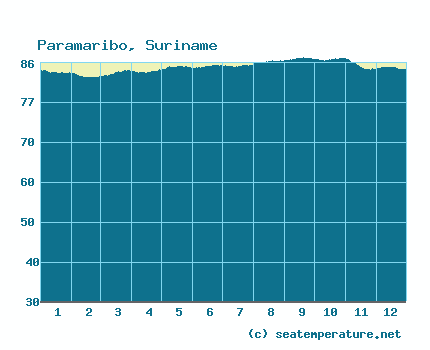 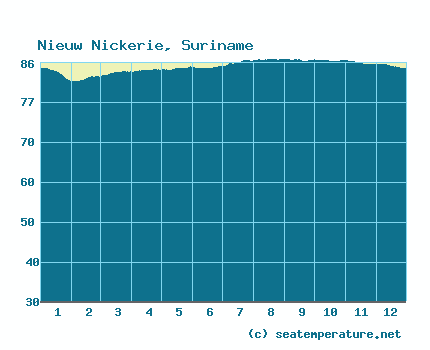 We process, analyze and store data for every beach and city in Suriname. Below is a table with current weather data and trends in some places of the country.

Suriname is located in South America. The country is washed by the Atlantic Ocean. Suriname is a small country. To determine the temperature of the water in it, we track only two settlements.

Subequatorial, hot and constantly humid. The average air temperature is around + 26°C and varies little during the year. Even at night, the temperature rarely drops below + 24°C, and in the dry season it can reach + 36°C in the shade. Permanent northeastern trade winds bring some coolness, but this is felt only in the coastal zone. Precipitation is 2300-3000 mm per year, and it rains about 200 days a year. The rainy season usually lasts from November to January and from May to July (at this time rains often cause severe flooding). Although Suriname lies outside the hurricane zone, powerful rains with “sibibusi» wind (literally “a forest broom», such rains quite often break off almost all foliage from trees) are frequent during the rainy season, during which up to 300 mm of water falls in a few hours.