Water temperature on the beaches of Spain

Most popular locations in Spain over the past week

Conditions of sea water on beaches in Spain

Now in the beaches in Spain, the water temperature has very different values. There are locations where it is warm and comfortable, and there are places where the water is cool for swimming.

The water temperature in Spain has increased both over the past 10 days and over a month.

Today the warmest water in Spain is recorded in Sant Jordi d'Alfama. Its value in this location is 78°F. And the coldest one is in Soesto, its value 59°F.

For the two most popular locations for swimming in Spain, the graphs of changes in the average water temperature throughout the year are as follows: 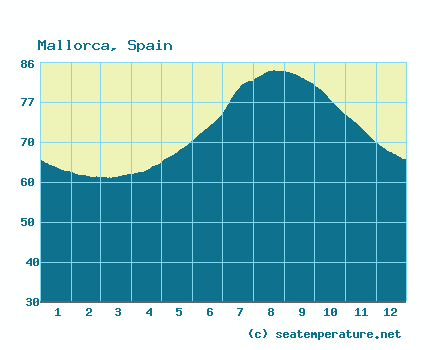 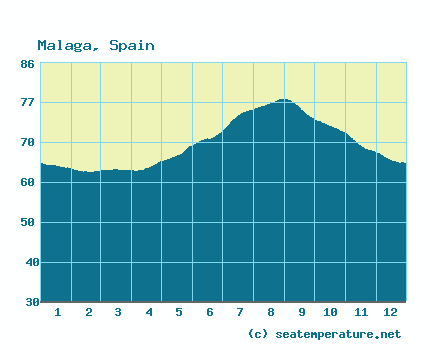 We process, analyze and store data for every beach and city in Spain. Below is a table with current weather data and trends in some places of the country.

Spain is located in Europe. The country is washed by six seas, such as the Atlantic Ocean, the Balearic Sea, the Bay of Biscay, the Strait of Gibraltar, the Sea of ​​Alboran, the Mediterranean Sea. Spain is a large resort country and has a long coastline. To determine the temperature of the water in it, we track 323 settlements and resorts.

Due to the length of Spain from north to south and a ramified mountain system, the climate varies quite markedly in different parts of the country. The vertical zonality is also clearly visible. The northern regions are in quite peculiar conditions - here the influence of moist marine masses from the Atlantic is strong, therefore in Galicia, Asturias, Cantabria and the Basque Country mild (from + 8 ° С to + 14 ° С) and rather humid winters, and summers are moderately warm ( from + 21°C to 26°C). However, from the north, this region is fenced off by a thick wall of the Pyrenees mountains (up to 3404 m high), therefore, in mountainous areas the temperature in winter can drop to -7°C, and in summer it usually does not warm above + 22°C. At the same time, these same mountains, as it were, are blocked by very hot air masses coming from the south, from the territory of Africa, which in the summer often leads to an increase in daytime temperature to + 32 ° С. The narrow strip of the coast north of the mountains in its weather conditions already refers to the temperate marine climate. Precipitation is up to 1200 mm per year, mainly in the autumn-winter period. Frosts and heavy snowfalls are not uncommon in winter mountains. The central regions of Spain are located in the area of ​​high plateaus and mountain ranges of Meseta, so the climate here is close to sharply continental - day and night temperatures can vary by 10-15 degrees even in summer. Winter is dry and for such a southern region it is cold (from -4 ° С to + 8 ° С), summers are hot (up to + 30 ° С in the afternoon) and dry. In Madrid, in summer the average temperature is around + 25 ° С (in this case, at night it can drop to + 16 ° С, and during the day the thermometer can exceed + 38 ° С), in winter - about + 5 ° С. Precipitation is not more than 500 mm per year, mainly in spring and autumn. In the mountainous regions of Aragon and northern Castile, snow often falls in the winter. In the Pyrenees, Sierra Nevada and Sierra de Guadarram, many peaks are covered with snow all year round. The eastern coast of the country is in the zone of subtropical Mediterranean climate. It has dry, hot summers and mild winters. In summer, the temperature can reach + 36-38 ° С with an average level of about + 27 ° С, in winter the thermometer does not fall below + 12 ° С, although it usually stays in the region + 14-18 ° С (the Mediterranean coast of the country is quite long, therefore in the south it is always somewhat warmer than in the north). There is little precipitation (500-600 mm per year), mainly in autumn and winter. Water in the summer warms up to + 23-27°C, so the beach season here lasts from May-June to October. In the Balearic Islands, the climate is subtropical Mediterranean. However, due to their position, the islands receive slightly more rain than the nearby continental coast of the country. Yes, and summer temperatures here are slightly lower - + 26-28 ° С with daily maximums in the region of + 30-32 ° С. The beach season in the Baleares begins in March, when the water temperature rises to + 18°C, and ends in October. On the islands of the Canary archipelago, the climate is close to tropical trade wind. The proximity of the cold ocean currents noticeably softens the summer heat inherent in the entire region, however, it evens out the general temperature background - in summer, on any of the islands of the archipelago, the average temperature ranges from + 18 ° С to + 21 ° С at maxima from + 36 ° С to + 38 ° С, in winter, the thermometer does not drop below + 12 ° С at maxima up to + 24 ° С. However, the Harmattan hot wind blowing from the African coast is able to sharply increase the air temperature at any time of the year, but summer trade winds almost completely level its influence during this period. Water temperature is even more constant - + 20-23 ° С all year round. There is little rainfall - from 250 to 400 mm per year, with Fuerteventura, Lanzarote and the southern regions of Gran Canaria and Tenerife quite arid (no more than 200 mm per year), and the northwestern regions (especially mountainous) are much wetter. Local rains are very strong, but short-term. Often they are accompanied by powerful thunderstorms.