Water temperature on the beaches of South Africa

Most popular locations in South Africa over the past week

Conditions of sea water on beaches in South Africa

Now in the beaches in South Africa, the water temperature has different values. There are very cold locations, there are cool places, and there are beaches with warm and comfortable water.

The water temperature in South Africa has increased both over the past 10 days and over a month.

Today the warmest water in South Africa is recorded in Richards Bay. Its value in this location is 76°F. And the coldest one is in Hondeklip Bay, its value 56°F.

For the two most popular locations for swimming in South Africa, the graphs of changes in the average water temperature throughout the year are as follows: 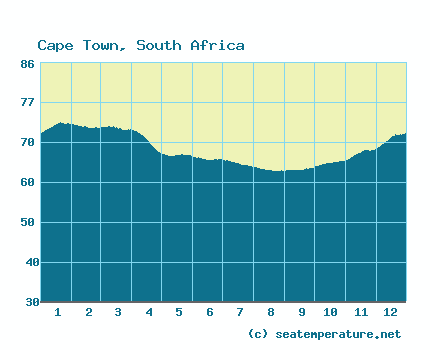 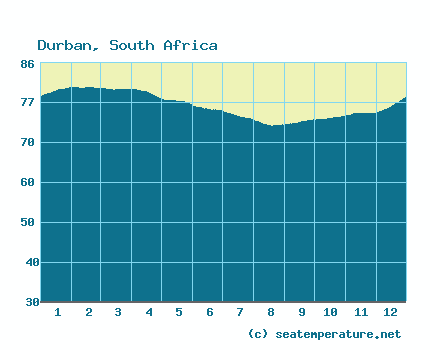 We process, analyze and store data for every beach and city in South Africa. Below is a table with current weather data and trends in some places of the country.

The Republic of South Africa is located in Africa. The country is washed by two oceans, such as the Atlantic Ocean, the Indian Ocean. South African Republic - has a fairly long coastline. To determine the temperature of the water in it, we track 24 settlements and resorts.

Tropical in the north and subtropical in the south of the country. The western coast of the country is washed by the cold Bengal current, and the eastern by the warm Mozambique current, which, along with the elevated relief and coastal mountain ranges, contribute to the formation of the country's special climate.The average January temperature is from +18 C to +27 o C, July - from +7 C to +10 o C, while, depending on the terrain, even neighboring areas can significantly differ from each other in air temperature. Precipitation falls from 30-150 mm. on the west coast, up to 650 mm. on the central plateaus and up to 2000 mm. on the eastern slopes of the Dragon Mountains.