Water temperature on the beaches of Somalia

Most popular locations in Somalia over the past week

Conditions of sea water on beaches in Somalia

Now in all beaches in Somalia, the water is very warm and comfortable for swimming.

The water temperature in Somalia tends to decrease, its value has decreased both over the last 10 days and over the month.

Today the warmest water in Somalia is recorded in Cadale. Its value in this location is 81°F. And the coldest one is in Buur Gaabo, its value 79°F.

For the two most popular locations for swimming in Somalia, the graphs of changes in the average water temperature throughout the year are as follows: 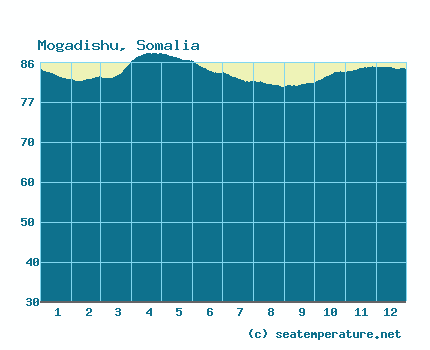 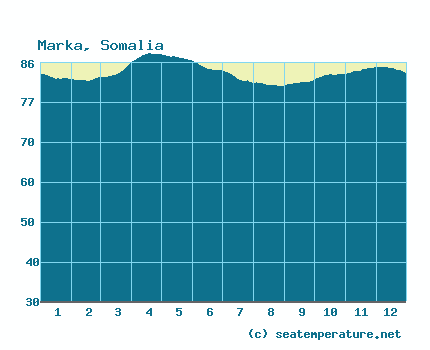 We process, analyze and store data for every beach and city in Somalia. Below is a table with current weather data and trends in some places of the country.

Somalia is located in Africa. The country is washed by three seas, such as the Indian Ocean, Gulf of Aden, and the Arabian Sea. Somalia is a small country. To determine the temperature of water in it, we track only ten settlements or resorts.

Subequatorial monsoon. In the north - tropical desert and semi-desert. Temperatures in winter reach + 23-24 o C, in summer +34 o C on average, however, in some mountainous areas the temperature can drop to 0 o C at night, and on the coasts rise to +47 C with almost absolutely dry air. Moreover, daily fluctuations in the dry «winter» season can reach 30-35 o C. For a year, only 200-300 mm falls. precipitation, only in the southeast - up to 600 mm., mainly in the «wet» season, lasting from April to July. Four seasons really stand out. “ Jilal » - starts in January and is the most contrasting, dry and very hot. “ Gu » is the first rainy season lasting from March to June. “ Hagaa » in August is the dry monsoon season. The second rainy season lasts from September to December and is called Dayr.