Water temperature on the beaches of Solomon Islands

Most popular locations in Solomon Islands over the past week

Conditions of sea water on beaches in Solomon Islands

Now in all beaches in Solomon Islands, the water is very warm and comfortable for swimming.

The water temperature in Solomon Islands tends to decrease, its value has decreased both over the last 10 days and over the month.

Today the warmest water in Solomon Islands is recorded in Honiara. Its value in this location is 86°F. And the coldest one is in Buala, its value 86°F.

For the two most popular locations for swimming in Solomon Islands, the graphs of changes in the average water temperature throughout the year are as follows: 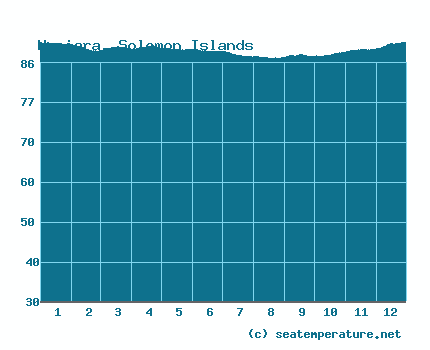 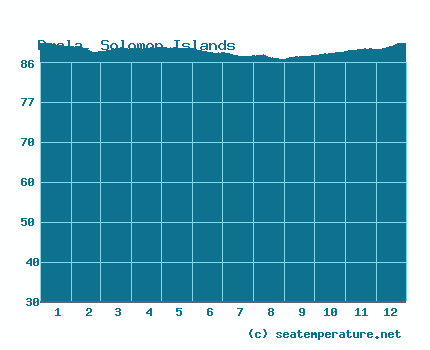 We process, analyze and store data for every beach and city in Solomon Islands. Below is a table with current weather data and trends in some places of the country.

Solomon Islands is located in Australia and Oceania. The country is washed by the Pacific Ocean. Solomon Islands is a small country. To determine the temperature of the water in it, we track only two settlements.

Subequatorial monsoon, very hot and humid. The air temperature throughout the year is almost unchanged - + 25-30 o C. From the end of April to the beginning of November (local winter), relatively dry and cool weather (+ 24-27 C) is caused by southeast trade winds blowing at this time (sometimes the direction of the winds shifts to northern or even western rumbas - this is a clear harbinger of storms and hurricanes). In the summer (December-January - April-March), northwestern winds dominate, and the air temperature rises to + 26-32 C with an air humidity of about 90%. Up to 3,500 mm of precipitation falls in a year (in Honiara - 2,250 mm). The maximum amount of rain falls during the period from December to March, and the windward shores of the islands receive 15-30% more rain in summer and in winter than the leeward ones. Hurricanes are most likely in the summer, however, most tropical typhoon paths lie much east and south of the Solomon Islands, so here they are much less likely than on the more eastern islands to achieve destructive power.