Water temperature on the beaches of Slovenia

Most popular locations in Slovenia over the past week

Conditions of sea water on beaches in Slovenia

Now the water temperature in the beaches in Slovenia is cool. Swimming in this water can be uncomfortable.

The water temperature in Slovenia tends to decrease, its value has decreased both over the last 10 days and over the month.

Today the warmest water in Slovenia is recorded in Izola. Its value in this location is 60°F. And the coldest one is in Piran, its value 59°F.

For the two most popular locations for swimming in Slovenia, the graphs of changes in the average water temperature throughout the year are as follows: 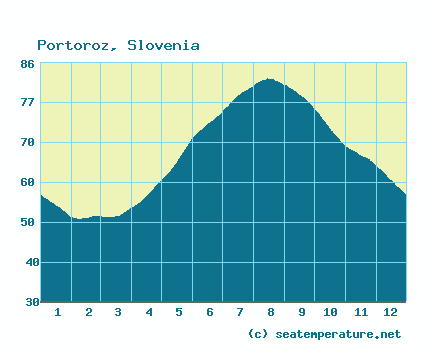 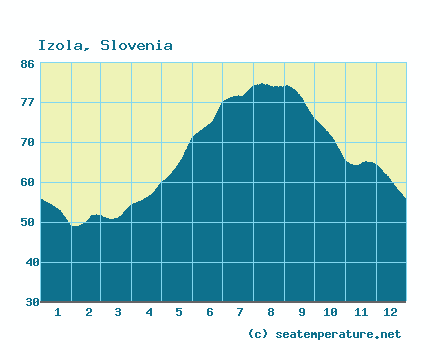 We process, analyze and store data for every beach and city in Slovenia. Below is a table with current weather data and trends in some places of the country.

Slovenia is located in Europe. The country is washed by the Adriatic Sea. Slovenia is a small country. To determine the temperature of the water in it, we monitor only seven settlements or resorts.

Mostly temperate continental, with clearly distinguished three climatic zones - Central European in the east of the country (hot summers and cold winters), Alpine in the northwest (cold winters and moderate summers) and Mediterranean on the Adriatic coast. In summer, the average air temperature in most of the country is + 21°C, and in winter - from -2°C in the north-west to + 6°C on the Adriatic coast.