Water temperature on the beaches of Senegal

Most popular locations in Senegal over the past week

Conditions of sea water on beaches in Senegal

Now in all beaches in Senegal, the water temperature is quite comfortable, and in some places it is very warm and even hot.

The water temperature in Senegal tends to decrease, its value has decreased both over the last 10 days and over the month.

Today the warmest water in Senegal is recorded in Cap Skirring. Its value in this location is 80°F. And the coldest one is in Saint Louis, its value 73°F.

For the two most popular locations for swimming in Senegal, the graphs of changes in the average water temperature throughout the year are as follows: 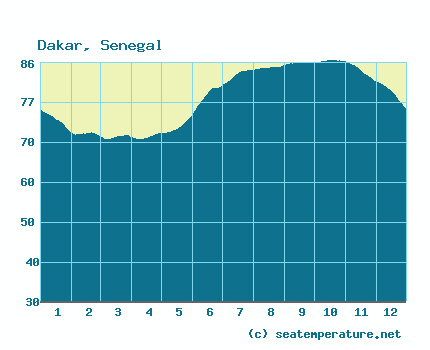 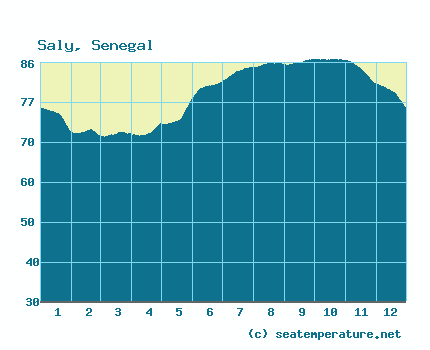 We process, analyze and store data for every beach and city in Senegal. Below is a table with current weather data and trends in some places of the country.

Senegal is located in Africa. The country is washed by the Atlantic Ocean. Senegal - has a fairly long coastline. To determine the temperature of the water in it, we track 11 settlements and resorts.

Subequatorial, in the north - transitional to tropical. The air temperature is approximately the same everywhere and depending on the season ranges from +23 C to +28 o C. The rainy season lasts from July to October (the average annual rainfall in the north is about 200-350 mm., In the south - about 1550 mm.). The wettest area is the south of the Atlantic coast, where sometimes up to 2000 mm falls during a year. precipitation. The amount of precipitation can vary sharply from year to year (for example, in the Dakar region - from 235 to 1485 mm.). The change of seasons is also determined by the precipitation regime, since from November to April the dry northeastern Harmatan winds blow from the Sahara, and from May to October the wet southwest monsoon brings heavy rains (the rainy season in the south lasts 5-7 months, and in the north - from the force of 2-3 months).