Water temperature on the beaches of Saudi Arabia

Most popular locations in Saudi Arabia over the past week

Conditions of sea water on beaches in Saudi Arabia

Now in all beaches in Saudi Arabia, the water temperature is quite comfortable, and in some places it is very warm and even hot.

The water temperature in Saudi Arabia tends to decrease, its value has decreased both over the last 10 days and over the month.

Today the warmest water in Saudi Arabia is recorded in Jeddah. Its value in this location is 86°F. And the coldest one is in Al Khafji, its value 72°F.

For the two most popular locations for swimming in Saudi Arabia, the graphs of changes in the average water temperature throughout the year are as follows: 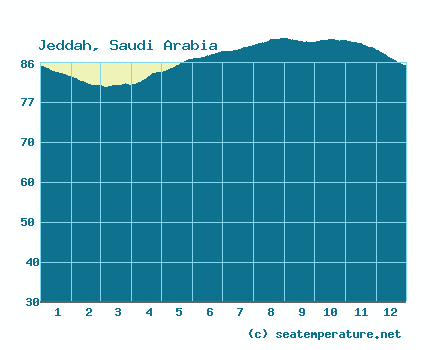 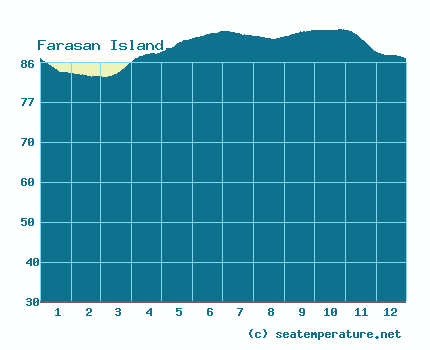 We process, analyze and store data for every beach and city in Saudi Arabia. Below is a table with current weather data and trends in some places of the country.

Saudi Arabia is located in the Middle East. The country is washed by two seas, such as the Red Sea, the Persian Gulf. Saudi Arabia - has a fairly long coastline. To determine the temperature of the water in it, we track 14 settlements and resorts.

The climate in the north is subtropical, in the south - tropical, hot and extremely dry. The average July temperatures everywhere are above the + 30 ° С mark, while daily maximums often reach + 47-50 ° С, and the temperature in the shade rarely drops below + 42 ° С. In winter, the temperature is around + 20°C in the western regions and from + 8°C to + 20°C in the desert eastern regions. At the same time, during winter nights in the desert, the temperature can drop to almost zero, although in the summer there is often a thirty-degree difference between daytime and nighttime temperatures. The average annual rainfall is not more than 100-200 mm, and they are distributed unevenly - in the central and eastern regions, precipitation is possible only in February - April, in the west - from late November to late February. In winter, fogs are not uncommon in mountainous areas.