Water temperature on the beaches of Saint Lucia

Most popular locations in Saint Lucia over the past week

Conditions of sea water on beaches in Saint Lucia

Now in all beaches in Saint Lucia, the water is very warm and comfortable for swimming.

The water temperature in Saint Lucia has risen over the past 10 days, but has dropped compared to 30 days ago.

Today the warmest water in Saint Lucia is recorded in Soufriere. Its value in this location is 82°F. And the coldest one is in Castries, its value 80°F.

For the two most popular locations for swimming in Saint Lucia, the graphs of changes in the average water temperature throughout the year are as follows: 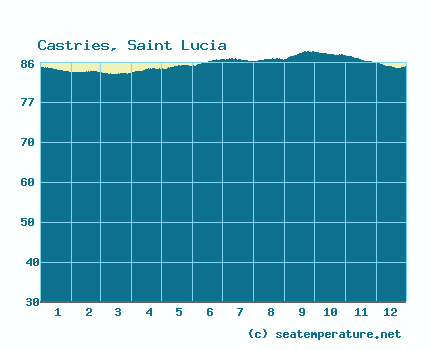 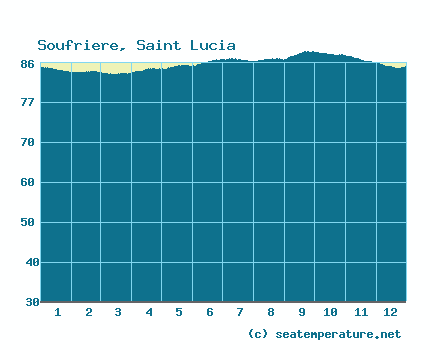 We process, analyze and store data for every beach and city in Saint Lucia. Below is a table with current weather data and trends in some places of the country.

Saint Lucia is located in Central America. The country is washed by the Caribbean Sea. Saint Lucia is a small country. To determine the temperature of the water in it, we monitor only one locality.

The climate of the island is tropical trade winds, warm and fairly even. The average monthly temperature in the winter period (December-March) fluctuates around the mark of +24 o C, in the summer - about +26 o C. Moreover, the daily temperature differences are small, even in winter the difference between night and day does not exceed 6 degrees. The water temperature off the coast all year round is about + 24-26 o C. Precipitation is about 1300 mm per year. Two seasons are quite clearly distinguished: dry (from January to March-April) and rainy (from May-June to September-December). Powerful but short-term heavy rains, usually at the end of the day, are possible at any time of the year. Destructive tropical hurricanes are frequent, especially frequent at the end of summer.