Water temperature on the beaches of Saint Kitts and Nevis

Conditions of sea water on beaches in Saint Kitts and Nevis

Now in all beaches in Saint Kitts and Nevis, the water is very warm and comfortable for swimming.

The water temperature in Saint Kitts and Nevis has risen over the past 10 days, but has dropped compared to 30 days ago.

Today the warmest water in Saint Kitts and Nevis is recorded in Basseterre. Its value in this location is 82°F. And the coldest one is in Dieppe Bay Town, its value 79°F.

For the two most popular locations for swimming in Saint Kitts and Nevis, the graphs of changes in the average water temperature throughout the year are as follows: 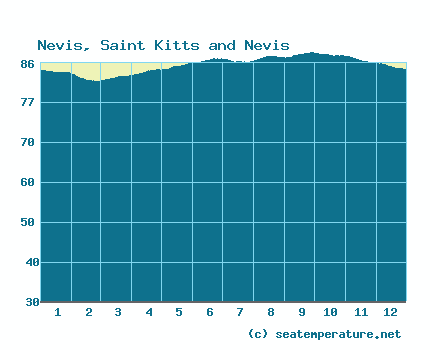 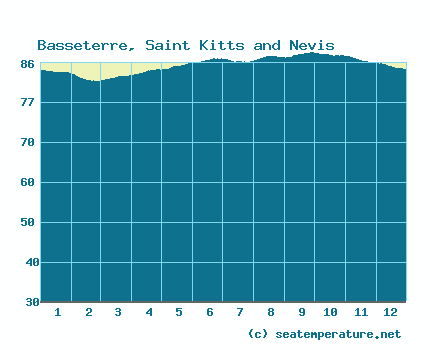 We process, analyze and store data for every beach and city in Saint Kitts and Nevis. Below is a table with current weather data and trends in some places of the country.

Climate in Saint Kitts and Nevis

Tropical trade winds, hot and very even. Fluctuations in average monthly temperatures are insignificant - from +18 C to +24 oC, and air temperature in summer rarely drops below +27 C even at night and rarely exceeds +30 C in the daytime. Precipitation falls from 700 to 1200 mm per year. The nature of the distribution of rain directly depends on the height of the place above sea level and its geographical position. Maximum rain falls during the period from May to October-November, and during this period up to 70% of the annual rainfall can fall on the northeastern slopes of the mountains (up to 2000 mm in some years), and in the south the weather differs little from the rest of the year . The relatively dry season lasts from December to April. Like the other Leeward Islands, Saint Kitts and Nevis is located in the passage of strong tropical hurricanes, which are most likely from August to October.