Water temperature on the beaches of Saint Helena

Most popular locations in Saint Helena over the past week

Conditions of sea water on beaches in Saint Helena

Now in beaches in Saint Helena, the water temperature is on the line of comfort. There are locations with cool water, there are places with more or less comfortable water.

The water temperature in Saint Helena has increased both over the past 10 days and over a month.

For the two most popular locations for swimming in Saint Helena, the graphs of changes in the average water temperature throughout the year are as follows: 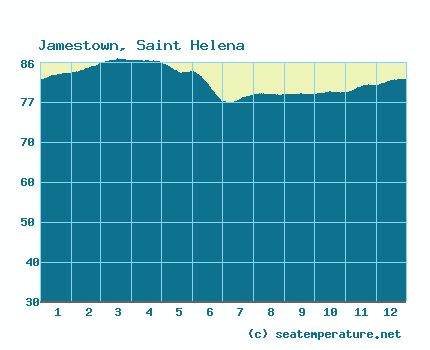 We process, analyze and store data for every beach and city in Saint Helena. Below is a table with current weather data and trends in some places of the country.

Saint Helena is located in South America. The country is washed by the Atlantic Ocean. Saint Helena is a small country. To determine the temperature of the water in it, we monitor only one locality.

Tropical marine. The average monthly temperature ranges from + 19°C (January) to + 30°C (July), while the general temperature background is quite uniform, even in winter a drop in the thermometer column below + 13°C is a rare occurrence. However, subjectively it always seems a little colder than it actually is, which is caused by moist ocean air, constant winds and frequent fogs. Precipitation falls from 400 to 1500 mm per year, December and January - the wettest months of the year.