Water temperature on the beaches of Puerto Rico

Most popular locations in Puerto Rico over the past week

Conditions of sea water on beaches in Puerto Rico

Now in all beaches in Puerto Rico, the water is very warm and comfortable for swimming.

The water temperature in Puerto Rico tends to decrease, its value has decreased both over the last 10 days and over the month.

Today the warmest water in Puerto Rico is recorded in Puerto Real. Its value in this location is 82°F. And the coldest one is in Culebra, its value 80°F.

For the two most popular locations for swimming in Puerto Rico, the graphs of changes in the average water temperature throughout the year are as follows: 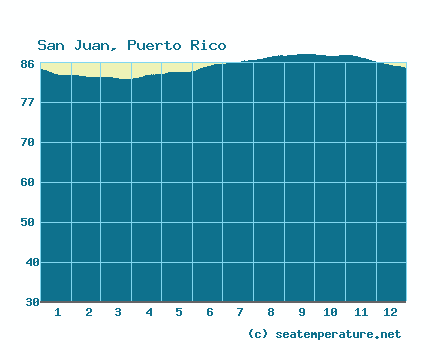 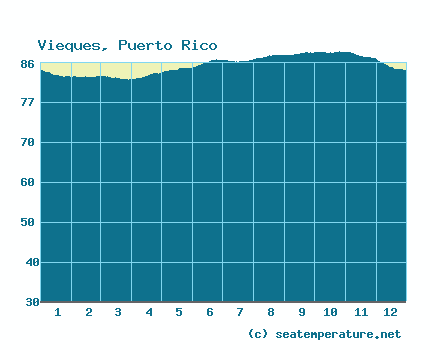 We process, analyze and store data for every beach and city in Puerto Rico. Below is a table with current weather data and trends in some places of the country.

Puerto Rico is located in Central America. The country is washed by the Caribbean Sea. Puerto Rico - has a fairly long coastline. To determine the temperature of the water in it, we track 35 settlements and resorts.

Tropical trade wind, warm and very even. The average monthly temperature during the year varies slightly - from + 22-24 C in the winter to + 28-29 C in the summer. Daily changes in temperature are also weak, but in the mountainous areas it can be cool at night. The temperature in the southern regions is usually somewhat warmer than in the north, and in the central mountainous municipalities it is always noticeably cooler than on the coast. Precipitation falls from 800 to 2500 mm per year, and their distribution is rather uneven - the areas around El Yunke peak receive up to 2000 mm of rain per year, while the southwestern regions do not exceed 850 mm. Hurricanes are so common in Puerto Rico that the English word «hurricane» itself is believed to be derived from the name of the god of evil in Taino mythology - Huracan.Powerful atmospheric vortices roll over the territory of the country from May to November. The weather during this period is quite hot, very humid and windy (the wind speed on the periphery of a typhoon can reach 150 km134h).