Water temperature on the beaches of Philippines

Most popular locations in Philippines over the past week

Conditions of sea water on beaches in Philippines

Now in all beaches in Philippines, the water is very warm and comfortable for swimming.

The water temperature in Philippines tends to decrease, its value has decreased both over the last 10 days and over the month.

Today the warmest water in Philippines is recorded in Tabina. Its value in this location is 86°F. And the coldest one is in Manila, its value 81°F.

For the two most popular locations for swimming in Philippines, the graphs of changes in the average water temperature throughout the year are as follows: 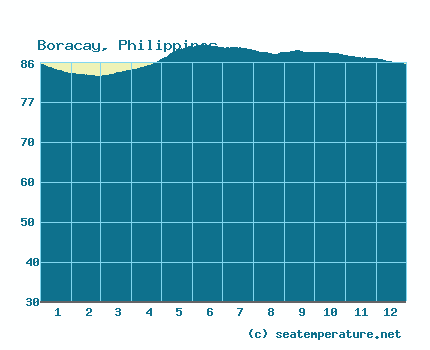 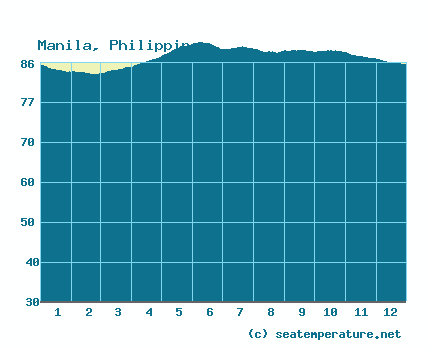 We process, analyze and store data for every beach and city in Philippines. Below is a table with current weather data and trends in some places of the country.

Philippines are in Asia. The country is washed by eight seas, such as Sea Visayan, Sea Camotes, Sea Mindanao, Sea Sibuyan, Sea Sulawesi, Sea Sulu and others. The Philippines is a large resort country and has a long coastline. To determine the temperature of the water in it, we track 946 settlements and resorts.

Tropical marine and subequatorial monsoon. Three seasons stand out, determined by the monsoons: the summer blows from the south and brings high temperature, humidity and storms. The northeastern winter comes from the Pacific, it is much stronger than the summer, but the rainfall brought by it mostly pours out on the northern shores of Luzon, Samara and Leyte. The rainy season lasts from June to September (temperature + 23-33 ° С, precipitation more than 1000 mm), the cool dry season - from October to February (23-39 ° С, precipitation up to 400 mm), and hot dry occurs in March May (over + 35 ° С, precipitation no more than 300-800 mm). At the same time, the average temperature at any time of the year is around + 27°C (November and December are the coolest months of the year, daytime temperature during this period is kept at around + 28°C,and in the early hours on the coast it can drop to + 17°C), and the humidity is quite high all year round (1000-4000 mm of precipitation falls), August is the “wettest» month of the year. In mountainous areas it is always cooler than on the coast, even frosts are not uncommon in winter. From June-August to October, destructive typhoons are frequent.