Water temperature on the beaches of Papua New Guinea

Most popular locations in Papua New Guinea over the past week

Conditions of sea water on beaches in Papua New Guinea

Now in all beaches in Papua New Guinea, the water is very warm and comfortable for swimming.

The water temperature in Papua New Guinea tends to decrease, its value has decreased both over the last 10 days and over the month.

Today the warmest water in Papua New Guinea is recorded in Rabaul. Its value in this location is 86°F. And the coldest one is in Vanimo, its value 84°F.

For the two most popular locations for swimming in Papua New Guinea, the graphs of changes in the average water temperature throughout the year are as follows: 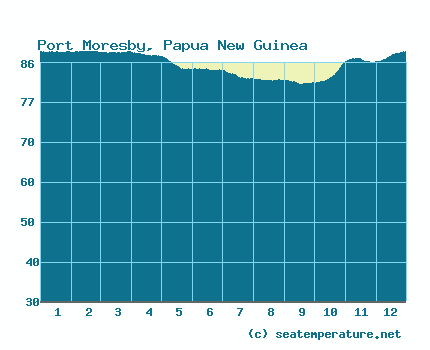 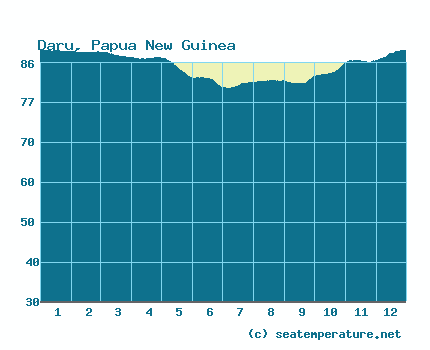 We process, analyze and store data for every beach and city in Papua New Guinea. Below is a table with current weather data and trends in some places of the country.

Papua New Guinea is located in Australia and Oceania. The country is washed by four seas, such as the Pacific Ocean, the Coral Sea, the New Guinea Sea, the Solomon Sea. Papua New Guinea has a fairly long coastline. To determine the temperature of the water in it, we monitor 17 settlements and resorts.

Equatorial and subequatorial, marine. The climate of Papua New Guinea is hot and almost everywhere very humid. Summer temperatures fluctuate around + 24-32 o C, winter - + 24-28 o C, while the maximum air temperature on the coast at any time of the year can reach +40 o C, and in the mountainous areas it also stably holds at 7 -10 C below. Moreover, in the central regions, even in summer, the temperature at night can drop to +6 o C, and during the day the air warms up to + 26-28 o C. On the coast, the climate is more even - the difference between day and night temperatures rarely reaches 4-5 oC, but always very hot. Precipitation falls from 1300 to 5000 mm per year, and their nature can radically differ in different regions of the country. About 1,000 mm of rain falls annually in Port Moresby (the southeastern coast of the Gulf of Papua), while in Lae (just 300 km to the north) - up to 4,500 mm, and in the western regions of the island of New Britain - (300 km east of Lae ) - up to 5200-6000 mm per year. In most of New Guinea, the wet season is from December to March, the dry season is from May to October, although most often the seasonality depends on the nature of the main winds and can noticeably change even on two nearby slopes of the same mountain range. During the two transition months (April and November), the weather is unstable and is not suitable for travel due to strong winds and short-term, but very powerful showers.