Water temperature on the beaches of Norway

Most popular locations in Norway over the past week

Conditions of sea water on beaches in Norway

Now in the beaches in Norway, the water temperature is very low and not suitable for swimming.

The water temperature in Norway tends to decrease, its value has decreased both over the last 10 days and over the month.

Today the warmest water in Norway is recorded in Etnesjoen. Its value in this location is 49°F. And the coldest one is in Barentsburg, its value 34°F.

For the two most popular locations for swimming in Norway, the graphs of changes in the average water temperature throughout the year are as follows: 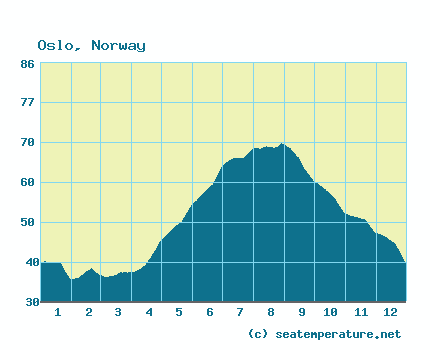 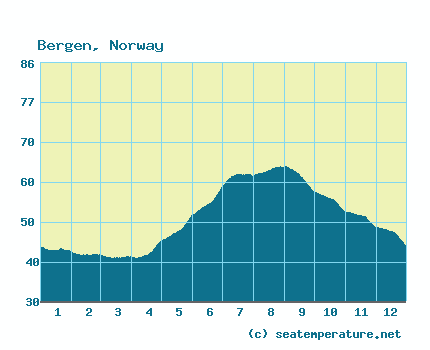 We process, analyze and store data for every beach and city in Norway. Below is a table with current weather data and trends in some places of the country.

Norway is located in Europe. The country is washed by two seas, such as the Norwegian Sea and the North Sea. Norway is a large resort country and has a long coastline. To determine the temperature of the water in it, we track 187 settlements and resorts.

Thanks to the Gulf Stream and the North Atlantic Current, coastal areas have a mild, temperate marine climate (in the far north - subarctic). In the interior, especially in the mountains, the continental climate is hotter in the summer and colder in the winter. January temperature ranges from + 2°C in the southwest to -12°C in the north, July - from + 15°C to + 6°C, respectively, although sometimes the air warms up to + 25°C even in the north. Precipitation falls from 300 mm per year in the east of the country to 3000 mm on the western slopes of the mountains. In the northern part of the country, beyond the Arctic Circle, at the height of summer is a polar day, and in winter the polar night reigns.