Water temperature on the beaches of North Korea

Most popular locations in North Korea over the past week

Conditions of sea water on beaches in North Korea

Now in the beaches in North Korea, the water temperature is very low and not suitable for swimming.

The water temperature in North Korea tends to decrease, its value has decreased both over the last 10 days and over the month.

Today the warmest water in North Korea is recorded in Nampo. Its value in this location is 49°F. And the coldest one is in Najin, its value 46°F.

For the two most popular locations for swimming in North Korea, the graphs of changes in the average water temperature throughout the year are as follows: 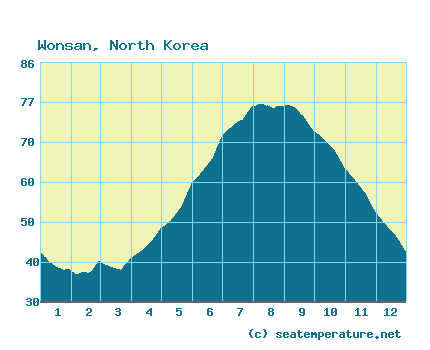 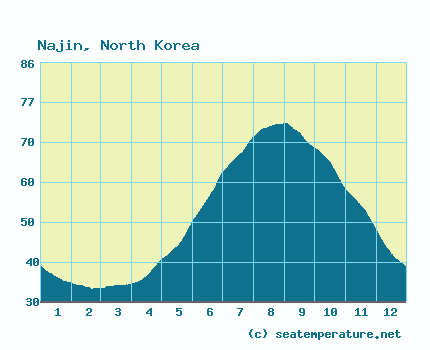 We process, analyze and store data for every beach and city in North Korea. Below is a table with current weather data and trends in some places of the country.

North Korea is located in Asia. The country is washed by two seas, such as the Sea of Japan, the Yellow Sea. DPRK is a small country. To determine the temperature of the water in it, we track a total of eight settlements or resorts.

Moderate monsoon, relatively severe. Seasonal differences are very dramatic - summers are mild and warm in the country, and winters are cold and dry. In winter, the cold continental air entering here from the mountains of the Asian continent brings dry, clear and cold weather with temperatures up to -14 ° С, and in the mountains - below -18 ° С (the average value fluctuates around -4 ° С in the south and -8 ° С - in the north). However, cold periods in winter often interspersed with warm weather. In summer, the weather is determined by the circulation of oceanic air masses, bringing abundant moisture, the prevailing average temperature during this period is + 18-22 ° С. Precipitation falls from 800-1000 mm in the region of Pyongyang and the east coast to 1500-2000 mm per year in the mountainous regions. Most precipitation usually occurs during the monsoon period (mid-summer) and late autumn.Winters are not very snowy and often very windy, and the air is dry and transparent.