Water temperature on the beaches of Norfolk Island

Most popular locations in Norfolk Island over the past week

Conditions of sea water on beaches in Norfolk Island

Now in beaches in Norfolk Island, the water temperature is on the line of comfort. There are locations with cool water, there are places with more or less comfortable water.

The water temperature in Norfolk Island has increased both over the past 10 days and over a month.

For the two most popular locations for swimming in Norfolk Island, the graphs of changes in the average water temperature throughout the year are as follows: 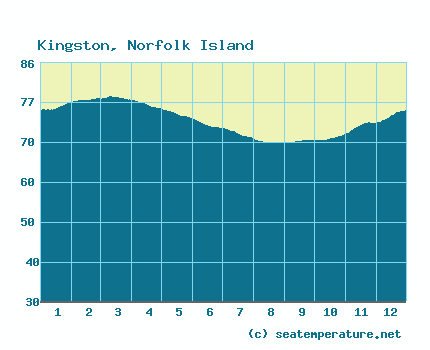 We process, analyze and store data for every beach and city in Norfolk Island. Below is a table with current weather data and trends in some places of the country.

Norfolk is located in Australia and Oceania. The country is washed by the Pacific Ocean. Norfolk is a small country. To determine the temperature of the water in it, we monitor only one locality.

Moderate marine, transitional to subtropical. Geographically lying in the subtropic zone, Norfolk has a slightly drier and cooler climate than is typical for this zone. The average July temperatures (winter in the southern hemisphere) range from +14 C to +16 o C, the average January temperatures range from +19 C +24 o C. The hottest months are January and February (local summer), the coolest month is July. The water temperature off the coast of Norfolk in winter is approximately +18 o C, in summer it often reaches +26 oC. Precipitation falls from 400 to 1500 mm per year, mainly in the winter. Typhoons are frequent (especially from May to July), but here they still do not have their colossal destructive power, but appear in the form of very heavy rains and storms.