Water temperature on the beaches of New Zealand

Most popular locations in New Zealand over the past week

Conditions of sea water on beaches in New Zealand

Now in the beaches in New Zealand, the water temperature is varied. In addition to fairly cold places, there are some where swimming can be more or less comfortable.

The water temperature in New Zealand has increased both over the past 10 days and over a month.

Today the warmest water in New Zealand is recorded in Auckland. Its value in this location is 66°F. And the coldest one is in Portobello, its value 54°F.

For the two most popular locations for swimming in New Zealand, the graphs of changes in the average water temperature throughout the year are as follows: 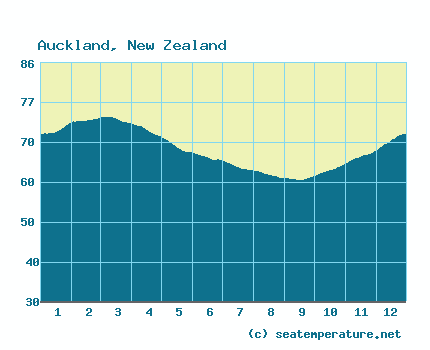 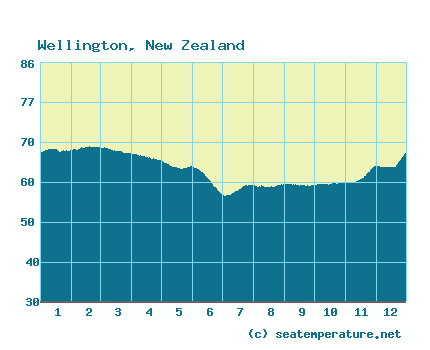 We process, analyze and store data for every beach and city in New Zealand. Below is a table with current weather data and trends in some places of the country.

New Zealand is located in Australia and Oceania. The country is washed by two seas, such as the Pacific Ocean, the Tasman Sea. New Zealand - has a fairly long coastline. To determine the temperature of the water in it, we track 44 settlements and resorts.

Subtropical sea in the north and moderate sea in the south, average July temperatures (winter) - from +12 C in the north to +5 C in the south, average January temperatures - from +19 C in the north to +14 C in the south. In this case, the temperature and humidity on the western and eastern slopes of the mountains can vary quite strongly. The hottest months are January and February (up to + 27-30 C), the coolest month is July (in the south the temperature at this time can drop to 0 C). In mountainous areas, it is much colder at any time of the year, although warm oceanic air masses significantly level the influence of altitudinal zonation. Precipitation falls from 400 mm. per year on the east coast up to 3000 mm. in the west, while regardless of the season, their intensity is approximately the same. Snow in the mountains lies from November to March.Very high levels of insolation and winds blow almost constantly.