Water temperature on the beaches of New Caledonia

Most popular locations in New Caledonia over the past week

Conditions of sea water on beaches in New Caledonia

Now in all beaches in New Caledonia, the water is very warm and comfortable for swimming.

The water temperature in New Caledonia has increased both over the past 10 days and over a month.

Today the warmest water in New Caledonia is recorded in Touho. Its value in this location is 83°F. And the coldest one is in Noumea, its value 80°F.

For the two most popular locations for swimming in New Caledonia, the graphs of changes in the average water temperature throughout the year are as follows: 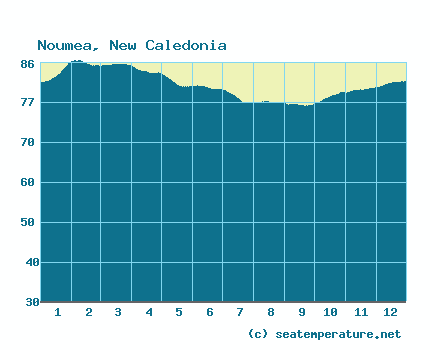 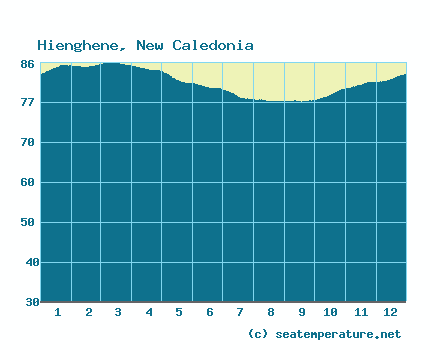 We process, analyze and store data for every beach and city in New Caledonia. Below is a table with current weather data and trends in some places of the country.

New Caledonia is located in Australia and Oceania. The country is washed by the Coral Sea. New Caledonia is a small country. To determine the temperature of the water in it, we monitor only seven settlements or resorts.

Tropical trade winds, hot and humid. The temperature does not change much during the year - the average in winter (April to August) is about + 19-23 o C, in summer (November-March) + 24-26 o C. The annual rainfall is from 3000 mm. in the eastern part of the archipelago up to 700 mm. in the West. Mostly it rains from December-January to March, during the passage of cyclones. This period is characterized by cloudy weather and powerful tropical hurricanes. From September to November-December the season of trade winds lasts when the weather is very windy, but the sky is clear.