Water temperature on the beaches of Nauru

Most popular locations in Nauru over the past week

Conditions of sea water on beaches in Nauru

Now in all beaches in Nauru, the water is very warm and comfortable for swimming.

The water temperature in Nauru has risen over the past 10 days, but has dropped compared to 30 days ago.

Today the warmest water in Nauru is recorded in Nauru. Its value in this location is 82°F. And the coldest one is in Arijejen, its value 81°F.

For the two most popular locations for swimming in Nauru, the graphs of changes in the average water temperature throughout the year are as follows: 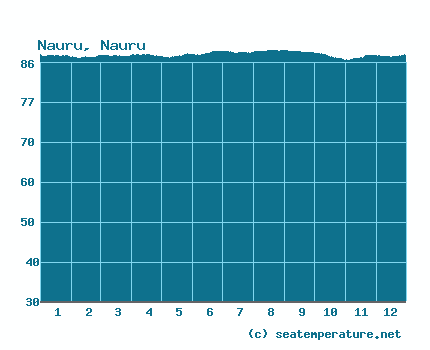 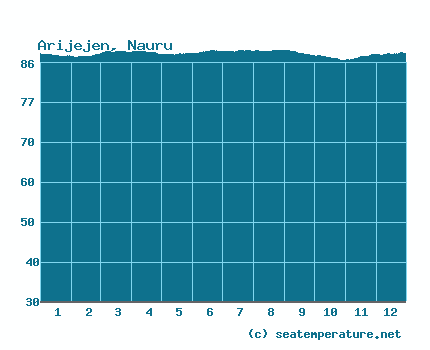 We process, analyze and store data for every beach and city in Nauru. Below is a table with current weather data and trends in some places of the country.

Nauru is located in Australia and Oceania. The country is washed by the Pacific Ocean. Nauru is a small country. To determine the temperature of the water in it, we track only two settlements.

Equatorial monsoon, very hot and humid. Nauru Island lies almost at the equator, so the monthly average temperatures - from +28 C to +34 C do not change much throughout the year. In this case, the daytime heat, due to the lack of vegetation and strong heating of the rocky base from the scorching rays of the sun, can reach + 38-41 o C, while at night it is only slightly cooler. Only in the period from March to October, when the northeastern trade winds blow, the air temperature drops by 3-4 oC, but only along the coast - the Central Plateau area warms up as much as at any other time of the year. Precipitation is about 2500 mm per year. From November to February, the cyclone season lasts, when the weather becomes extremely humid, and the island literally “drowns in the rain», but in the rest of the year, due to lack of vegetation and soil features, real droughts are common.