Water temperature on the beaches of Namibia

Most popular locations in Namibia over the past week

Conditions of sea water on beaches in Namibia

Now at the beaches in Namibia, the water temperature is in the discomfort zone. Swimming in such water will not give you much pleasure.

The water temperature in Namibia tends to decrease, its value has decreased both over the last 10 days and over the month.

For the two most popular locations for swimming in Namibia, the graphs of changes in the average water temperature throughout the year are as follows: 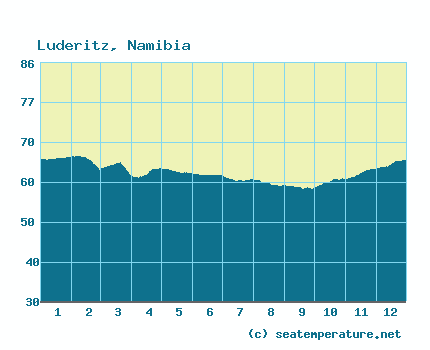 We process, analyze and store data for every beach and city in Namibia. Below is a table with current weather data and trends in some places of the country.

Namibia is located in Africa. The country is washed by the Atlantic Ocean. Namibia is a small country. To determine the temperature of the water in it, we monitor only one locality.

Tropical, very dry and hot, is influenced by the cold Bengal current of the Atlantic Ocean. In the north-east of the country is subtropical, with strong continental features. The average temperature in the summer (December-April) + 28-32°C (in the north to + 38°C), at night + 15-20°C (in desert regions, the temperature at night can drop sharply to 0 C). In winter, respectively, + 15-20°C and about 0°C at night. Cold winds constantly blow on the coast. The amount of precipitation varies from 10-50 mm per year on the Atlantic coast (often they fall here only in the form of fogs) to 400-600 mm in the extreme northeast. The «rainy season» lasts from November to March-April.