Water temperature on the beaches of Morocco

Most popular locations in Morocco over the past week

Conditions of sea water on beaches in Morocco

Now in beaches in Morocco, the water temperature is on the line of comfort. There are locations with cool water, there are places with more or less comfortable water.

The water temperature in Morocco tends to decrease, its value has decreased both over the last 10 days and over the month.

Today the warmest water in Morocco is recorded in Tarfaya. Its value in this location is 67°F. And the coldest one is in Essaouira, its value 62°F.

For the two most popular locations for swimming in Morocco, the graphs of changes in the average water temperature throughout the year are as follows: 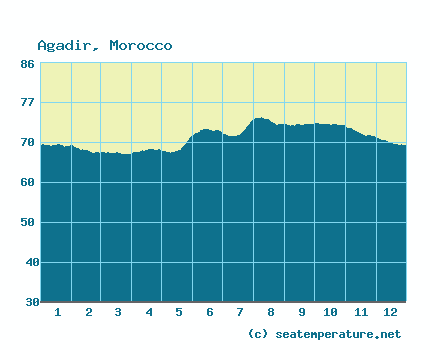 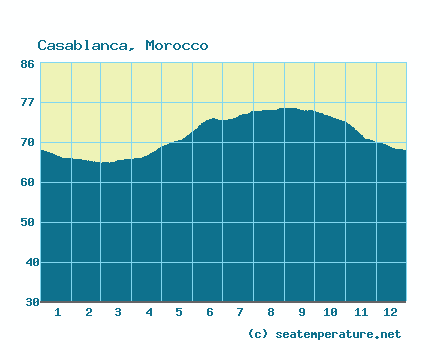 We process, analyze and store data for every beach and city in Morocco. Below is a table with current weather data and trends in some places of the country.

Morocco is located in Africa. The country is washed by one ocean and two seas: the Atlantic Ocean, the Strait of Gibraltar, the Sea of ​​Alboran. Morocco - has a fairly long coastline. To determine the temperature of the water in it, we track 20 settlements and resorts.

On the Mediterranean coast of the country, the climate is mild, subtropical, the average temperature in the summer is about + 24-28ºС (sometimes reaches + 30-35ºС), and in the winter + 10-12ºС. Further south, the climate is becoming more continental, with hot (up to + 37ºС) in the summer and cool (up to + 5ºС) in the winter. In winter and summer, the daily temperature difference can reach 20ºС. Air masses from the Atlantic Ocean have a great influence on the northwestern part of the country - the climate is cooler and the daily temperature drops are much lower than in the rest of the country. In the Atlas mountains, the climate is highly dependent on the height of the place. Precipitation falls from 500-1000 mm per year in the north to less than 200 mm per year in the south. It rains mainly in the winter months. From time to time, the western slopes of the Atlas receive up to 2000 mm of rainfall, even floods of local scale are frequent, while in the south-east of the country there are years when rainfall does not occur at all.