Water temperature on the beaches of Montserrat

Most popular locations in Montserrat over the past week

Conditions of sea water on beaches in Montserrat

Now in all beaches in Montserrat, the water is very warm and comfortable for swimming.

The water temperature in Montserrat has increased both over the past 10 days and over a month.

Today the warmest water in Montserrat is recorded in Plymouth. Its value in this location is 82°F. And the coldest one is in Woodlands, its value 81°F.

For the two most popular locations for swimming in Montserrat, the graphs of changes in the average water temperature throughout the year are as follows: 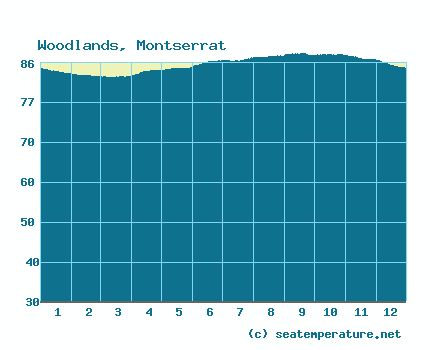 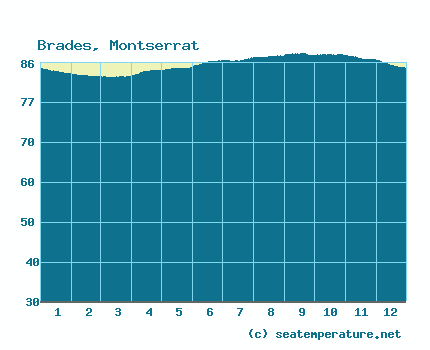 We process, analyze and store data for every beach and city in Montserrat. Below is a table with current weather data and trends in some places of the country.

Montserrat is located in Central America. The country is washed by the Caribbean Sea. Montserrat is a small country. To determine the temperature of the water in it, we monitor only one locality.

Subequatorial marine trade winds, warm throughout the year. The average air temperature on the coast is from +24 C to +35 C all year round, in the «mountainous regions» it is somewhat cooler - from +18 C to +27 o C. The period from December to February is somewhat cooler - the average monthly temperature at this time fluctuates from +21 C (in the evening) to +28 C (in the afternoon). In summer (May to October) it is slightly warmer - from +23 C in the evening to +31 C in the daytime. Precipitation falls from 800 to 3000 mm per year. There is no clearly expressed rainy season, rain can fall on the island at any time of the year, and usually the rains are very strong, but short-term. However, a certain peak of precipitation is observed from May to July, as well as from August to October-November, when tropical hurricanes hit the island.