Water temperature on the beaches of Mauritius

Most popular locations in Mauritius over the past week

Conditions of sea water on beaches in Mauritius

Now in all beaches in Mauritius, the water temperature is quite comfortable, and in some places it is very warm and even hot.

The water temperature in Mauritius has increased both over the past 10 days and over a month.

Today the warmest water in Mauritius is recorded in Tamarin. Its value in this location is 78°F. And the coldest one is in Quatre Soeurs, its value 76°F.

For the two most popular locations for swimming in Mauritius, the graphs of changes in the average water temperature throughout the year are as follows: 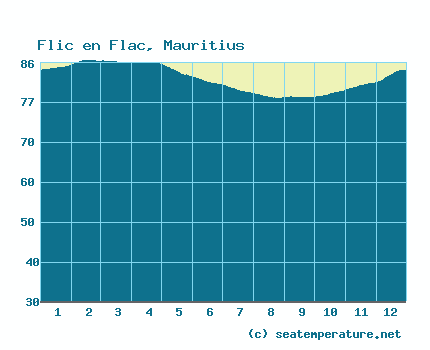 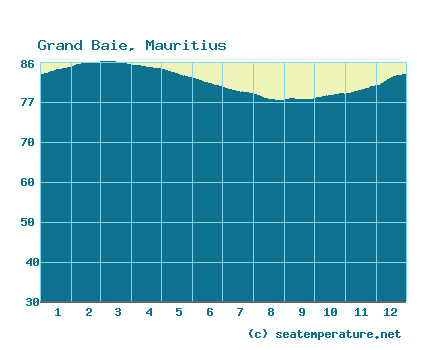 We process, analyze and store data for every beach and city in Mauritius. Below is a table with current weather data and trends in some places of the country.

Mauritius is located in Africa. The country is washed by the Indian Ocean. Mauritius - has a fairly long coastline. To determine the temperature of the water in it, we track 28 settlements and resorts.

Tropical marine, hot, but easily tolerated due to the abundant moisture brought by the trade winds from the ocean. Summer (November to April) is hot and humid - +25 С at night, +30 С and higher during the day, humidity reaches 80%. Winter (May to October) is cooler - +17 C at night, +23 C during the day, and drier. Weather during the day can change several times, but it never gets cold. Precipitation falls from 1,500 (western and northern parts of the island) to 5,000 (eastern part) mm. per year, mainly from December to March. The cyclone period lasts from December to mid-April, but they usually do not have a destructive force.